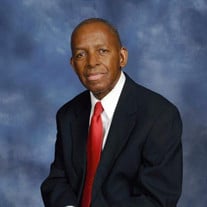 Psalms 1 tells us that a blessed man is one that walketh not in the counsel of the ungodly, nor standeth in the way of sinners, nor sitteth in the seat of the scornful. But his delight is in the law of the LORD; and in his law doth he meditate day and night. On Monday, December 25, 2017, the life of our beloved Deacon James Scott, Jr., a blessed man of God, came to an end as he ascended to his heavenly home. Born on July 3, 1943 in Belle Glade, Florida, he was the fifth of ten children born to the late Mr. James Scott, Sr. and Mrs. Fannie Armstrong Scott. At an early age, he accepted Christ as his personal Lord and Savior while attending the Nesby Chapel United Methodist Church in Nahunta, Georgia. He was educated in the Ware County School District, graduating from Center High School in the Class of 1962. He furthered his education, earning a Bachelors Degree in Business and Accounting from Tuskegee University in Alabama, and additional studies in Accounting from Midlands Technical College in Columbia, South Carolina. He was a loving, faithful, dedicated and committed husband to his wife of 40 years, Dolores Ballenger Scott. Together they made Zion Baptist Church their spiritual home. He exhibited a life dedicated and committed to God’s work, supporting the church’s overall vision of Kingdom Building. Being a doer of the word was most important to him. Mr. Scott served his church faithfully in many capacities including: deacon for 19 years; he attended Sunday school; Morning Worship Service; Prayer Service; and Bible Study. During his tenure, he served in various ministries including the Brotherhood, the Homeless, Christian Education, and Boy Scouts. He attended the various Conventions at the local, state and national levels, which included: Gethsemane Brotherhood, Baptist Education and Missionary Convention Brotherhood Auxiliary, and the National Baptist Convention of America. Deacon Scott had a studious spirit and was well-versed in biblical teachings. He reached out to his Richland County community through Favorite Sons, an organization that worked to enrich the lives of children and families. Deacon Scott, a retired Vietnam Veteran, served his country in the United States Army and Reserves for approximately 30 years until his retirement. He was employed in private industry for over 30 years. He worked both full-time and part-time at various venues which included Hewitt-Robins and Pontiac Foods. He was an avid health enthusiast who believed in eating the right foods and exercising (he ran 26 miles a week after work Monday through Saturday). In his spare time, Deacon Scott loved sports and was a Gamecocks fan; he enjoyed watching television, with interests ranging from the news, historical programming, and the counselling of Dr. Phil. When he traveled, he always enjoyed visiting museums. Deacon Scott was self-taught, “all-knowing,” and was a lifelong learner. Most importantly, he was a friend who could be relied on for wise counsel for family and others in need. In addition to his parents, Deacon Scott was preceded in death by four sisters (Lizzie Richardson, Minnie Bell Richardson, Bobbie Scott, and Odell Campbell), and two brothers (Herman Richardson and Albert Scott). He leaves to cherish precious memories his devoted wife, Dolores of the home; three children: Altovise Catrice Scott (Jacksonville, FL), Althea Chinue Scott (Bowie, MD), and James Chioke Scott (Atlanta, GA); nieces and nephews reared by him: Aderial LuShawnn Scott (Orlando, FL), Lorenzo Dymetrich Scott (Jacksonville, FL), Gwen Richardson (Jesup, GA); Dale (Julie) Richardson (Tifton, GA), and David (Anita) Richardson (Rockledge, FL); two brothers: John Scott (Pompano Beach, FL), and Elijah Peterman (Daytona, FL); a siste,r Ebecca Peterman (Daytona, FL); brothers-in-law: Marcus Campbell (Valdosta, GA); William (Linda) Ballenger, Stanley (Silver) Ballenger, Samuel (Tomracida) Ballenger of Greer, SC; sisters-in-law: Sylvia (Henry) Robinson (Orangeburg, SC) and Gail (Earl) Jackson (Columbia, SC); two aunts: Gladys B. Goforth and Annette G. Hill (Columbia, SC); and a host of other relatives, and friends. Not only will Deacon Scott be missed by his biological and church families, but by many others who knew him as a man of God who “walked the talk.” May God bless his fond memories

Psalms 1 tells us that a blessed man is one that walketh not in the counsel of the ungodly, nor standeth in the way of sinners, nor sitteth in the seat of the scornful. But his delight is in the law of the LORD; and in his law doth he meditate... View Obituary & Service Information

The family of James Scott Jr. created this Life Tributes page to make it easy to share your memories.

Psalms 1 tells us that a blessed man is one that walketh not...