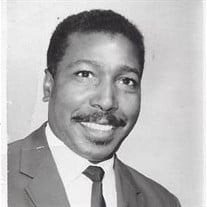 Deacon James C. Simuel, Sr., son of the late Lonnie L. Simuel and Helen Fox Simuel, was born on May 14, 1920 in Columbia, South Carolina. He transitioned on December 20, 2015 at Palmetto Health Baptist Hospital, Columbia, SC with loved ones surrounding him. James was the last surviving child of eight children. His siblings were Lucious, Heyward, Robert, Leroy, Joseph, Gertrude and Catherine Copeland. He cherished his siblings dearly and they, along with his parents, helped to shape him into the wonderful family man that he was. James attended Columbia area public schools and graduated from Booker T. Washington High School in 1944. Education was a very important aspect in his life. He continued his studies at Benedict College and graduated with a Bachelor of Science Degree in Education in 1950. James later received his Masters Degree in Education from South Carolina State College in 1962. He went on to become an elementary and high school principal and taught in various counties throughout South Carolina for over 34 years. James retired from the Wil Lou Gray Opportunity School, West Columbia, SC. James had accepted Christ into his life at an early age and was devoted to the Word of God and to service for his church. He was a dedicated and committed member of Bethlehem Baptist Church of Columbia, Inc., where he was a Deacon for over seventy years and held various positions within the church. Deacon Simuel was Chairman of the Deacon Board, Secretary of the Deacon Board, Secretary of the Trustee Board, Chairperson of the New Members Orientation Committee, and had membership in many other organizations within the church. With his faithful service and dedication, the church honored him with the title Deacon Emeritus. During James’ time at Benedict College, he met, and later married his wife, then Mamie Lou Rickenbacker. To this union they were blessed with four beautiful children; three daughters, Jacqueline, Gwendolyn, Darlene and one son, James Carroll, Jr. Deacon Simuel is survived by his loving wife of over 67 years and his children Jacqueline (Sammie) Simuel Gaines, Gwendolyn (George) Simuel Jamison, James (Vernetta) C. Simuel, Jr., and Darlene (Bobby) Simuel Schumpert; five grandchildren, Whitney (Omari) Gaines Hall, Brittany Jamison, Briana Jamison, James Carroll Simuel, III, and Summer Simuel; one great-grandchild, Omari Hall-Brown, Jr.; and a host of nieces, nephews, and cousins, all who will truly miss him dearly. James always thrived to have a decent and respectable life. He was a loving Christian, a dedicated husband, wonderful father and grandfather, and most of all a genuinely great man of God. His motto was “do the right thing” and when something was not going as planned, he would remind us to “Trust in the Lord with all thine heart; and lean not unto thine own understanding. In all thy ways acknowledge Him, and He shall direct thy path.” -Proverbs 3:5-6 Deacon Simuel’s daily prayers always ended with, “God if you would be so kind to honor my partisan, I will be careful to give you the praise, the honor, and the glory in Christ Jesus’ name.” Amen

The family of Deacon James C. Simuel Sr. created this Life Tributes page to make it easy to share your memories.

Send flowers to the Simuel family.