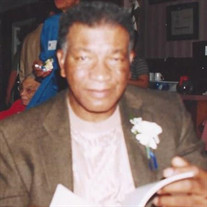 James H. Whiting was called from earthly labor to heavenly reward on Thursday, January 4, 2018, at Palmetto Health Baptist in Columbia. James began life on July 18, 1934, in Urbanna, Virginia as one of five children born to the late Chris D. and Mary Della Webb Whiting. James attended the public schools of Middlesex County, Virginia. In 1960, he moved to Old Greenwich, Connecticut and was employed by Flying Tigers in Jamaica, New York. James later moved to Long Island, New York and was employed by Liberty Moving and Storage in Hauppauge, New York, where he retired in 1999. After retiring, James relocated to Columbia, South Carolina in May of 2000. At an early age, James confessed his love for Jesus Christ and was baptized and joined the Lebanon Baptist Church in Urbanna, Virginia. He later joined Union Baptist Church in New Rochelle, New York, where he served as a trustee for many years. Upon his relocation to South Carolina, James joined Gill Creek Baptist Church, where he continued his service to kingdom building as a trustee and a member of the Male Choir. James was also a member of the Antioch Aid Ministry of Philadelphia, Pennsylvania. James enjoyed many hobbies, chief among which were working in the yard, baseball, fishing, hunting, barbecuing, and spending quality time with family and friends. James loved travelling, especially to Lancaster, Pennsylvania. “Dutch Country” with his beloved wife Gertrude, sister Lucy, and cousins: Mary and Earl Stephenson. In addition to his parents, James was preceded in death by a son, James Whiting, Jr.; and three brothers: Chris Whiting, Jr., Roosevelt Whiting, and George Jones. Left to cherish precious memories are his loving wife and childhood sweetheart, Gertrude, of the home; daughters: Helen (Robert) McCall of Columbia, and Tricia (Rick) Williams of Deer Park, New York; five grandchildren: Jamal, Marcus, Robert, Jackie, and Ashley; two great-grandchildren: Delvin and Kylie; a sister, Lucy Whiting Gresham, of Willingboro, New Jersey; a daughter-in-law, Felicia Whiting Taswell of Williamsburg, Virginia; two brothers-in-law: Willis Braxton, Jr., of Urbanna and Theodore Braxton of Deer Park; two sisters-in-law: Lily Braxton of Teaneck, New Jersey, and Mary B. Whiting of Urbanna; and a host of other relatives and friends all of whom loved and will miss him dearly. James will truly be missed. We could not ask for a better husband, father, granddad, great-granddad, brother, uncle, cousin, and friend. We love you!! Sorrowfully submitted by the family. In lieu of flowers, the family request that you make memorial donations to the American Heart Association 7272 Greenville Avenue Dallas, Texas, 75231 or online at http://donatenow.heart.org.

James H. Whiting was called from earthly labor to heavenly reward on Thursday, January 4, 2018, at Palmetto Health Baptist in Columbia. James began life on July 18, 1934, in Urbanna, Virginia as one of five children born to the late Chris D.... View Obituary & Service Information

The family of James H Whiting created this Life Tributes page to make it easy to share your memories.

Send flowers to the Whiting family.