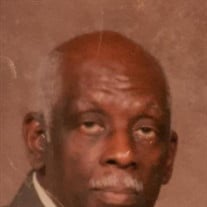 Janerette Samuel McQuiller, Sr. , 93, entered his heavenly home on Saturday, March 28, 2020, at 12:01 AM at his home. Born on July 14, 1926, in Sumter, South Carolina was the third oldest of seven children to the late James McQuiller and Sallie Brown McQuiller. “Bully” as he was affectionately called was reared in a Christian home and his family although limited by material wealth, possessed the uncommon riches of a strong faith in God, impeccable integrity, and a firm belief in hard honest work. He was educated in the public schools in Sumter County and later attended Manhattan Tech, Brooklyn, New York, majoring in Electronics. Janerette was a veteran of World War II. Drafted his Senior Year into the U.S. Navy, where he attended the Naval Cook and Bakery School from 1943-1946. Upon completion he was assigned as 2nd Ship Cook in the U.S. Navy Military Sea Transport Service until 1955; 1956-57, Janerette was 2nd cook at the U.S. Public Health Hospital, Manhattan Beach, New York, New York. In Sumter, Janerette's uncle became ill and asked him to returned home to run his uncle's store (Rabbit Brown). One day a beautiful young lady, Annie Mae Wilson caught his eyes and he knew that she would be the love of his life and wife. They were married on July 18, 1952 and moved to Brooklyn to live for over 40 years. To this union ten children were born. Janerette was a quiet, soft-spoken, knowledgeable, loving, devoted, compassionate husband and father. His love for his wife was undeniable. This walking encyclopedia was full of wisdom; there was not a question that he could not answer or an answer that he would not give. Bully showed support for his family and his friends. September 14, 1982, Janerette retired after 33 years of government service with 27 years with U. S. Postal Service, Brooklyn, New York. After returning to Sumter, he joined Mt. Moriah United Methodist church, where he served faithfully on the Male Choir, United Methodist Men and Chair of Trustee until his health began to failed and Janerette was named Father of The Church . Janerette was a member of the American Legion Post #15 of Sumter. Bully was an excellent cook and baker. Everyone enjoyed his bread pudding, sweet potato pie and stuffing. No holidays were complete without these items on the table. He deeply loved reading and music. In addition to his parents, Mr. McQuiller was predeceased by two sisters, Amy Williams, Emma Norton, two brothers, James and David McQuiller; one sister-n-law, Scottie McQuiller; three brothers-in-law, Warren Williams, Walter Norton and Alvin King; one granddaughter, SSGT LaDeaner C. Williams; two grandsons, Rashawn Harper and Justin McQuiller and one great-grandson, Master John L. Williams, III. He leaves to cherish his memories: his loving and devoted wife of sixty-eight years, Annie Mae of the home; his ten children, Ruby (Alphonso) Williams-Times, Girard (Sylvania) Mcquiller Gordon (Sharon) and Raleigh of Sumter, SC; Rosanna Sanders, Janerette, Jr. (Virginia), Teresa (Robert) Lennon, Emmanuel (Pamela) of Brooklyn, NY; Arnold (Ana) of Queens, NY; and Sallie Jacobs (Oualdo) of Long Island, NY; one sister, Marie King, Brooklyn, NY; a special niece, Frances C. Moss of Sumter, SC, her daughter, Rosalind Moss of Atlanta, GA; 33 grandchildren, 32 great-grandchildren; and a host of nieces, nephews, other relatives and friends.

Janerette Samuel McQuiller, Sr. , 93, entered his heavenly home on Saturday, March 28, 2020, at 12:01 AM at his home. Born on July 14, 1926, in Sumter, South Carolina was the third oldest of seven children to the late James McQuiller and Sallie... View Obituary & Service Information

The family of Janerette Samuel McQuiller created this Life Tributes page to make it easy to share your memories.

Send flowers to the McQuiller family.