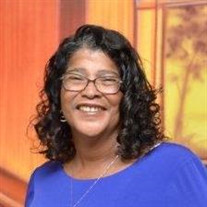 On Monday, December 23, 2019, the Lord called another soul from earthly labor to heavenly reward when Janice Lynette Olden answered the call from glory. Born Saturday, September 10, 1960, in Sumter County, South Carolina, she was the seventh of eight children born to the late John and Larlia Champion Olden. A lifelong member of Wayman Chapel AME Church, she served in many capacities including: the Stewardess Board; the Senior Usher Board; the Wayman Chapel Inspirational Choir; Class Leader; and former Acolyte Advisor. She was a graduate of Hillcrest High School in the Class of 1978, and a 1982 graduate of the University of South Carolina where she majored in Business Management. She was first employed by the Citizens & Southern Bank and later by Blue Cross Blue Shield as a voice analyst for over thirty-four years. In her spare time, she was an avid reader who enjoyed games, sewing, working with young people, and spending time with her family and friends. She was jovial, positive, personable, generous, and loving. Janice always saw the best in people and in every situation. Her many nieces and nephews were like her own children, and she spent countless hours at games, recitals, concerts, and anywhere else they performed or received recognitions and awards. In addition to her parents, she was preceded in death by a brother, Frank Olden; two sisters-in-law; and three brothers-in-law. Surviving are six siblings: Ruth Jenkins, Carrie Jenkins, Emma O. Neal, Eleanor C. Olden, all of Columbia, South Carolina, John C. Olden of Hopkins, South Carolina, and Thomas L. Olden of Wedgefield, South Carolina; six nieces: Kimberly Neal, Priya Jeter, Tyandra Olden-Small, Fantasia Singleton, Tomeshia Washington, and Tyara Olden; five nephews: Kent Olden, Vernon Jenkins, Isaiah Jenkins, Erik Neal, and Cedric Wright; two godchildren: Tyrone Raynard Gadson and Kourtney Blanding; a host of grandnieces and grandnephews.

On Monday, December 23, 2019, the Lord called another soul from earthly labor to heavenly reward when Janice Lynette Olden answered the call from glory. Born Saturday, September 10, 1960, in Sumter County, South Carolina, she was the seventh... View Obituary & Service Information

The family of Janice Lynette Olden created this Life Tributes page to make it easy to share your memories.

Send flowers to the Olden family.