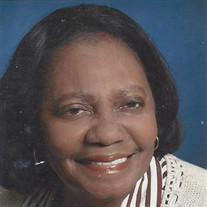 Janie Dibble Counts departed this earthly life on Monday, January 29, 2018, at her residence in Columbia, South Carolina. Born in Orangeburg, South Carolina, on August 8, 1937, she was the oldest of four children born to the late Freddie and Lucille Lockard Dibble. Janie was a graduate of Wilkinson High School in the Class of 1956. She also attended Walker College in Florida, where she completed studies in 1958, and later earned a Bachelor of Arts degree in Education from the University of Colorado in 1977. She earned two Masters degrees in Education from the University of South Carolina. She met the love of her life while they both attended elementary school in Orangeburg. They began dating her senior year in high school and in October of 1957, they were united in marriage. Their married life was filled with travelling the world. Jane's favorite country was Germany where all her sons were born. Finally, on July 1, 1977, the family retired to Columbia. After over twenty years of dedicated service as an educator who taught at numerous schools throughout the country (Allen University, Midlands Technical College, Marion and Saluda Counties public schools in South Carolina), on every grade level (including classes for the blind), she retired from CA Johnson High School in Columbia. In her spare time, she was very active in her church and community. She was a Sunday School teacher and enjoyed the Adult Formation Bible Study, Girl Scouts, sewing, cooking, football (the Dallas Cowboys and Carolina Panthers were her favorites), keeping up with current events, and politics. Jane was passionate about serving those in need at the Oliver Gospel Mission and was excited about the St. Luke Episcopal Fresh Start Ministry. She was also a dedicated member of the Woodland Home Owners Association. In addition to her parents, she was preceded in death by a son, Gary Counts; her brother, Freddie Dibble, Jr; and a sister, Rebecca Dibble Waymer. She leaves to cherish precious memories her beloved husband of sixty years, William W. Counts of the home; a daughter, Janice Counts of Southaven, Mississippi; two sons: Gregory W. Counts of Columbia, and Ronald W. (Barbara) Counts of Southaven; eleven grandchildren: Christopher Counts, Gary Counts, Jr., Bryce Counts, Clara Counts, Kierra Hunt, Stafford Counts, Jerome Hunt, Jr., Darcus Counts, Corieana LaSueur, Jaida Weeden, and Jordan Counts; three great-grandchildren: Kylan Hunt, KaMiyah Hunt and MaKennzie Hymon; a brother, William L. Dibble; and a host of other relatives and friends. The family requests that in lieu of flowers memorial donations be made to the Oliver Gospel Mission 1100 Taylor Street Columbia, South Carolina 29201 or the St. Luke Episcopal Fresh Start Ministry 1300 Pine Street Columbia, South Carolina 29204.

Janie Dibble Counts departed this earthly life on Monday, January 29, 2018, at her residence in Columbia, South Carolina. Born in Orangeburg, South Carolina, on August 8, 1937, she was the oldest of four children born to the late Freddie and... View Obituary & Service Information

The family of Janie Dibble Counts created this Life Tributes page to make it easy to share your memories.

Send flowers to the Counts family.