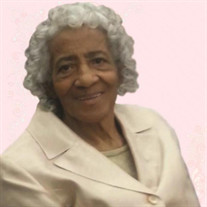 Mother Janie Ophelia Witherspoon, affectionately known as “Sweetie” departed this life on Thursday, August 20, 2020 at her home. Janie was born in Sumter, South Carolina on June 8, 1935 to the late Wilson McKinley Mickens and Lou Ida Holmes Mickens. Janie was educated in the public-school system of Sumter, South Carolina. She later attended Sumter Beauty College, Inc. where she pursued her cosmetology license. Most of her life she was blessed to be a Stay-At-Home Mom and created a nurturing environment for her husband, children, grandchildren, and all that entered her home. During the times that she worked, Janie was employed by Pioneer Dress Factory, Glen Manufacturing, and operated her own home-based florist. Janie was also a volunteer at Tuomey Regional Medical Center where she was able to walk in her calling of nurturing and taking care of those in need. Janie was a devoted wife and mother that loved her family to life. She was united in Holy matrimony to James on December 25, 1952, and from that union they had eight children, fourteen grand-children, twenty-one great grand-children, and two great great-grand-children. Janie was a sweet and nurturing Woman of God that accepted all and was undoubtedly loved by all. Some of Janie’s hobbies were cooking, baking, crafting, and singing. Janie’s voice was Angelic and was known to “stir up” the anointing and “set the church on fire”. Singing was a gift & calling and she humbly walked there-in. As the story is told, back in the days when it was common to hang clothes out to dry, people in the neighborhood would be drawn to the outside with her bellowing praises to the Most High as she went about her daily chores. Janie was a lifelong member of New Hope Ministries Church in Sumter, South Carolina, where she faithfully served in many capacities over the years. Some of her purposed serving included Church Secretary, President of the Missionary Auxiliary, President of the Minister’s & Deacon’s Wives Auxiliary, Sunday School Teacher, Usher, Altar Worker, Culinary Ministry, and many different choirs over the years. Janie was also an anointed intercessor and spiritual conduit that labored at the altar on the behalf of many over the years. Many times, it was said that she had a “direct line” to Jesus and if she prayed a prayer, no doubt He would hear it and the answer would be dispatched. She was preceded in death by her loving husband James Witherspoon of 67 years of matrimony, her parents Wilson and Lou Ida Mickens, one daughter Jacqueline W. Smith, four sisters Geneva Clark, Mary Quince, Marie Isaac, and Albertha Rogers, three brothers Earl Mickens, James “Peter” Mickens, and William Mickens. She leaves to cherish her precious memories, two sons, Elder James E. (Crystal) Witherspoon, Pastor Clifton N. Witherspoon, five daughters, Loretta (Pastor J. Russell) Rogers, Fiesta (Dwight) Brooks, Dr. Christola D. (Melvin) Brayboy, Pamala W. (Kenneth) Mercer, Minister Quentina W. (Cephus) Gregg, one sister; Susan Emma Spann, fourteen grands, twenty-one great grands, and two great-great grands and a host of devoted surrogate sons/daughters, in-laws, nieces, nephews, cousins, and friends. Janie leaves a legacy of LOVE and a bit of SWEETNESS in every life that she has TOUCHED. ATTENTION FAMILY AND PUBLIC: MASKS AND SOCIAL DISTANCING ARE REQUIRED FOR EVERYONE.

The family of Janie Ophelia Witherspoon created this Life Tributes page to make it easy to share your memories.