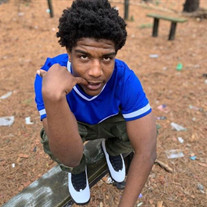 Sunrise..... Jarele Martez Blackson, affectionately known to all as “RELL-RELL AND RELL CHAPO,” was the son of Gregory and Cassandra Rhodes. He began his creative adventure of life on August 22nd, 2001 in Augusta, Georgia. Jarele also known as “Rell-Rell”, walked into his academic journey at Statesville Elementary School in Charlotte, North Carolina. Jarele continued his academic journey as he marched into Twin Lakes Middle School in Jacksonville, Florida. The family relocated back to Charlotte, North Carolina and Jarele continued his academic journey as a trooper, entering into his high school years at Butler High School in Charlotte, North Carolina. He made his parents extremely proud as he was an official High School Graduate in February 2020. Jarele was employed with Show Pros and R & B Lawn Care while he attended high school and continued to work after graduating. He continued to be filled with creativity and was a true go-getter. Jarele was considering the military after graduating high school. He was also investing time into his love for music creating multiple songs to include everyone’s favorite “Smoke.” After graduating, the sky was the limit and Jarele was ready to charge into this new adventure of life. Sunset….. Jarele received his angelic wings and flew safely to his new Heavenly home on Wednesday, August 5th, 2020. Loving memories will be cherished by his parents Gregory and Cassandra Rhodes, Charlotte, NC. One sister, Nykeisha Blackson, Charlotte, NC, two brothers, Jordan Blackson and J’Quan Rhodes, both of Charlotte, NC.; his grandfather, Tommie J. Turner, Sumter, SC; three aunts, Vanessa Sherrer, Charlotte, NC, Ursula Alston, Lexington, SC, Tomesena Pack, Charlotte, NC; two uncles, Joseph Rhodes, Sumter, SC and Jordan (Erica) Rhodes, Sumter, SC; three nieces, Nyasia Caldwell, Amiriah Rhodes and Loren Blackson and two nephews, Tayvion Wright and Ahmir Rhodes and many other loving relatives. He was preceded in death by his maternal grandmother, Dorothy M. Turner and his paternal Grandmother and grandfather, Betty Rhodes and Joseph Dwyer. Jarele’s fight has ended as he has finally reached his heavenly destination. This young man always had a love for music and a true zest for life with his inviting smile, kind heart, creativity and love for his family. Jarele, aka, Rell-Rell, aka, RELL CHAPO was always a Soldier for the Lord, and while young, he has still won the battle and is now resting in heaven smiling down on each and every one of us. To attend the graveside service virtually, please log onto https://us04web.zoom.us. The meeting code is: 217 032 2535. Password is: 12081963.

Sunrise..... Jarele Martez Blackson, affectionately known to all as &#8220;RELL-RELL AND RELL CHAPO,&#8221; was the son of Gregory and Cassandra Rhodes. He began his creative adventure of life on August 22nd, 2001 in Augusta, Georgia. Jarele... View Obituary & Service Information

The family of Jarele Martez Blackson created this Life Tributes page to make it easy to share your memories.

Send flowers to the Blackson family.