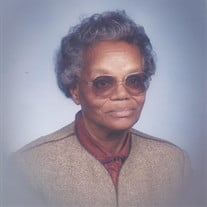 Early Sunday morning, December 9, 2018, the Lord called Joan Marie Davis from earthly labor to her heavenly reward. Born July 6, 1932, in Middletown, Connecticut, she was the fourth of seven children born to the late James Marcus Davidson and Alberta Banks Davidson. Raised in Cromwell, Connecticut, she was a graduate of Middletown High School in the Class of 1949. She moved to New York to take a course in nursing, and during her return trip to Middletown, she met the love of her life, Reverend Willie Lee Davis, Sr. Their marriage was blessed with eight children. She was employed by the Connecticut Valley Hospital and Woolworth Department Store as well as a teacher's aide and in a jewelry factory. In 1987, she retired and moved to Columbia, South Carolina, where she was a pastor's wife and first lady. Her husband served as pastor of Mount Sinai Pentecostal Church in Bloomville, South Carolina, before being transferred to St. John Pentecostal Church in Manning, South Carolina, where he was known as an associate pastor who did everything decently and in good order. Prior to his death in 2006, they became members of St. James Fire Baptized Holiness Church in Irmo, South Carolina. Upon his death, she was celebrated as Mother of the Church at both St. John and St. James. Her passions included birdwatching, Gospel crossword puzzles, and spending time with her various grandchildren and great-grandchildren. In addition to her parents and husband, she was preceded in death by a brother, Harold Davidson; two sisters: Dorothy Davidson and Shirley Johnson; and a daughter, Rebecca Davis. She leaves to cherish precious memories seven children: David (Jocelyn) Davis, Willie Davis, Jr., Roger Davis, Jonathan Davis, Sharon (Edward) Arthurs, Rosemary (Terry) Smith, and Elizabeth Davis; eighteen grandchildren; thirty-five great-grandchildren; two sisters: Marion Calloway and Barbara Ann Davidson; a brother, Robert Davidson; and a host of other relatives and friends.

The family of Joan Marie Davis created this Life Tributes page to make it easy to share your memories.