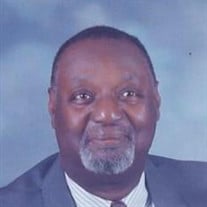 Joel Hampton Bonner, Jr. was called from earthly labor to heavenly reward on Tuesday, March 16, 2021. He was the ninth of twelve children, born in Columbia, South Carolina, on December 25, 1933, to the late Joel Hampton Bonner, Sr. and Blanche Roper Bonner. He was a graduate of the historic Booker T. Washington High School in 1951. While in high school, he joined the US Naval Reserve. He enlisted in the U.S. Air Force in 1951, and served his country until he was honorably discharged in 1953. After completing his military tour of duty, Joel enrolled in Benedict College where he earned a Bachelor of Science degree in Biology and Chemistry in 1958. While attending Benedict College he met the love of his life, the former Pearlease Glover, and in 1955 they were united in holy matrimony. This loving union was blessed with a son and namesake, Joel Hampton Bonner, III. Joel was an educator in the Walterboro Ruffin Community where he taught History and Chemistry. In 1958, he was employed by the U.S. Postal Service, where he served in various capacities and retired as Postmaster in 1989. Joel also worked alongside his wife operating a successful day care facility, Haskell Heights Day Care Center, for over thirty years. He was a lifelong, dedicated member of Sidney Park CME Church, where he served faithfully in many capacities including Sunday School Teacher and Superintendent; Trustee; and wherever else his gifts and talents were needed. In addition to his parents, he was preceded in death by his four brothers: William Bonner, Robert Bonner, Alexander Bonner, and Antonio Bonner; four sisters: Josephine Bonner Oglesby, Blanche Bonner Lewis, Beatrice Aaron, and Julia Antoinette Green. He leaves to cherish precious memories, his beloved wife and partner of sixty-six years, Pearlease Glover Bonner of the home; a son Joel H. Bonner, III of Columbia; three grandchildren: Jaleya Bonner, Treyon Bonner and Darrius Slater; a sister Louise Bonner Roseboro of Rock Hill, South Carolina; a brother Franklin (Carolyn) Bonner of Cross Hill, South Carolina; and a host of nieces, nephews, other relatives and friends.

Joel Hampton Bonner, Jr. was called from earthly labor to heavenly reward on Tuesday, March 16, 2021. He was the ninth of twelve children, born in Columbia, South Carolina, on December 25, 1933, to the late Joel Hampton Bonner, Sr. and Blanche... View Obituary & Service Information

The family of Joel Hampton Bonner Jr. created this Life Tributes page to make it easy to share your memories.

Send flowers to the Bonner family.