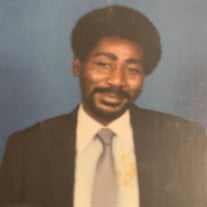 Today, we celebrate the Homegoing of JOHN LEE WASHINGTON, affectionately known as “John Issac'' also known as “The Doctor”. John was a loving and close brother, uncle, friend, and community member who will be gravely missed as he gained his Heavenly wings on Friday, February 5, 2021, at Mcleod Medical Center. John’s loved ones take comfort that he is now resting with our Lord. Our beloved JOHN was born in Lee County on December 9, 1951, the second oldest of the late John Franklin Washington and the late Winnie Brunson Washington. At an early age, John accepted the Lord as his personal Savior and he became a member of Mt. Olive A.M.E Church in Woodrow, SC. John graduated from Dennis High School, Class of 1970, and attended Friendship Community College in Rockhill, SC. John later made a life in Linden, NJ and was employed at Mid Atlantic Steel and Victory Tavern in Linden for many years, before relocating back home to Dalzell, SC. When anyone thinks of our JOHN ISAAC, what comes to mind is his amazing smile that would light up any room. The fact that he could have a conversation and make a friend with everybody is one of the things that made him special, because John never met a stranger. His friends and family will definitely miss him on the Spades table and the Pool table, where he was champion. Those were two of his favorite leisures, along with watching Westerns, always with his legs crossed. The smell and taste of his pot in the kitchen - chicken feet and pig feet, there will never be a match. If you ever needed an answer to anything under the sun, especially with matters of the heart, you could always call on THE DOCTOR, and we are so fortunate to have all of the professor’s lessons in our hearts. Brother John, Uncle John, Friend John, you were loved tremendously and you will be missed. Get your rest and we will fellowship again. John leaves to cherish precious memories: six loving sisters: Martha Harriott of Sumter, SC, Betty Jenkins of Charlotte, NC, Dora (Lonnie) Johnson and Beverly (Herbert) Johnson both of Dalzell, SC, Samuel “Argie” Martin of the home, and Melissa Johnson of Highpoint, NC; one brother, Dallas (Rosa) Washington of Battlecreek, MI; three aunts, Rosa Julius of Linden, NJ, Ada Brunson and Irene Blanding of Sumter, SC; two uncles, Earl Brunson of Dalzell, SC and Elijah (Daisy) Blanding of Jacksonville, Fl.; fifteen nieces and nephews who he loved and cherished as his own, Keith, Brian, Chico, Lindsay, Rita, Jason, Travis, Devon, Thelma, Courtney, Miracle, Destiny, Herberta, Pamela and Andre. A host of great nieces and great nephews, cousins and friends have many memories to sustain them. John was formerly married to Barbara Washington. In addition to his mother and father, John is preceded in death by two brothers, Bernard Washington and James Earl Washington, Sr. and a sister, Sheila Washington. To access the livestream of the service, please go to Facebook.com, search for Palmer Memorial Chapel Inc, and "like" the page. The livestream video will begin at 1:00 pm, the day of the service.

Today, we celebrate the Homegoing of JOHN LEE WASHINGTON, affectionately known as &#8220;John Issac'' also known as &#8220;The Doctor&#8221;. John was a loving and close brother, uncle, friend, and community member who will be gravely missed... View Obituary & Service Information

The family of John Lee Washington created this Life Tributes page to make it easy to share your memories.

Today, we celebrate the Homegoing of JOHN LEE WASHINGTON, affectionately...