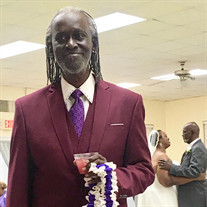 On September 30, 1956, Louvenia and Sammie Lee Wiley, Sr., were blessed with their third baby boy, firstborn in a hospital, John E. Wiley. One of six children: Boo, Jr., Minnie, BarBara, and Kenny, John stood out from the very beginning. Instead of working alongside his older brothers and father in the field, he choose to stay close to the skirt tails of his mother and grandmother, Pauline, to establish the beginnings of his great wisdom and talents. School records show that John was a graduate of Sumter High School Class of 1974, earned a Bachelor of Arts Degree in Psychology from Duke University in 1978, Cum Laude, and attended Princeton University, where he studied Dentistry. We can be sure that John exceeded all benchmarks schools ever provided. As a scholar, he started a legacy that could not be beat by his younger successors. There are stories often told of how younger siblings, nieces, and nephews were questioned in class..., "You are related to THE John Wiley??!" His knowledge was never hidden. If you didn't know, you asked John. After his studies at Princeton and completing some travels abroad, John returned to his home community of Sumter and was employed by the Sumter, Richland and Lee Counties Special Needs and Disability Boards. His compassion and natural ability to connect with others really began to shine. He was a dedicated member of High Hills A.M.E. Church, where he served in numerous capacities. They included, but were not limited to the following: Church School Teacher, Christian Education Director, 100 Men In Black Program Coordinator, Black History Month Program Coordinator, and the first Friendship Choir director and organizer. He also served on the Trustee Board, and was a Class Leader, member of the Steward Board, Pastor's Steward, Sons of Allen, Building and Steering Committee, and various church choirs. Beyond the walls of his church, John served as the Lancaster District Church School Superintendent, several years as Delegate to the District Conference, and Columbia Conference Church School Presenter. Within the Columbia Annual Conference, he served as a Delegate and Alternate to the Annual Conference, and a member of the Christian Education, Family Life, and Church School Committee. He also established the Postell Award for the Lancaster District. John took his final rest on Sunday, March 4, 2018 at his home in Sumter, SC. He joins his father and brother, James Ervin Wiley (Boo) in heaven. Survivors include, his mother, Louvenia R. Wiley; brothers: Paul (Althea) Baldwin, Atlanta, GA, Sammie Lee , Jr. (Cynthia) Wiley , Chesterfield, VA and Kenneth (De’Shaune) Wiley, Charleston, SC ; sisters: Minnie R. Wiley and Barbara (Chris) Blanding all of Sumter, SC; and a host of nieces, nephews and other relatives and friends. In addition to his father, he was preceded in death by a brother, James Ervin Wiley. John will be leave a void in anyone's life he has come in contact with, but we take comfort in knowing that he is resting peacefully in God's arms. In addition to his father, he was preceded in death by a brother, James Ervin Wiley. .

On September 30, 1956, Louvenia and Sammie Lee Wiley, Sr., were blessed with their third baby boy, firstborn in a hospital, John E. Wiley. One of six children: Boo, Jr., Minnie, BarBara, and Kenny, John stood out from the very beginning. Instead... View Obituary & Service Information

The family of John E Wiley created this Life Tributes page to make it easy to share your memories.

Send flowers to the Wiley family.