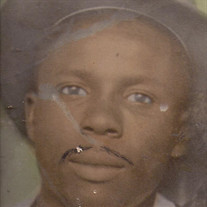 John Witherspoon, 83, affectionately known as "Spoon" departed this earthly life on Friday, November 4, 2016 at his residence in Sumter, SC. Born and educated in Clarendon County, he was the eldest son of seven children born of the late Laurel Wells and Dan Witherspoon. After graduating from High School he traveled to Miami, Florida in search of employment opportunities. Later he relocated to Stamford, CT, where he worked at Pitney Bowes and Norman Hoffman for over 30 years as a machinist. In Manning, early in his teen years, he met a beautiful young girl, Ruth Ragin, with a sweet smile, she became the love of his life, and they married at the tender age of 18, in 1950. To their loving union, eight children were born and they have been blessed with all eight living. After returning to the Sumter Community, he became a faithful member of St. Mark’s Baptist Church in Manning, South Carolina, where he served as a Deacon for many years. Mr. Witherspoon was referred to as a man of many gifts and talents; he was a loving father and he enjoyed fixing cars, fishing, yard work and gardening. He made sure he shared his vegetable harvest with his friends and neighbors. He also enjoyed serenading his family with singing and playing the guitar. In addition to his parents, he was preceded in death by three sisters: Helen Robinson, Betty Wells Witherspoon and Isabell Wells; and one brother, Preston Witherspoon. Those left to cherish his precious memories are his wife of 66 years, Ruth Ragin Witherspoon of the home, six daughters, , Ola Jean (Eden) Grandison, Norwalk CT, Ruth Nichols, Sumter, SC, Diane (Nat) Booker and Valerie Smith all of Stamford, CT, Runette (James) Adams, Tampa, FL, and Lynette (Greg) Brayboy, Norwalk, CT; two sons, Jonathan (Mona) Witherspoon, and Clark Witherspoon, Asheville; 22, grandchildren; 16, great-grandchildren ; 1 great-great grandchild; sisters: Etta Mae Corbin, Baltimore, MD, Sara Wells, Buffalo, NY, Jenny Lee Wells, Florida and Dorothy Witherspoon, Charlotte, NC; one brother, Timothy (Adrian ), Bronx, NY, and a host of other relatives and friends.

John Witherspoon, 83, affectionately known as "Spoon" departed this earthly life on Friday, November 4, 2016 at his residence in Sumter, SC. Born and educated in Clarendon County, he was the eldest son of seven children born of the late Laurel... View Obituary & Service Information

The family of John Witherspoon created this Life Tributes page to make it easy to share your memories.