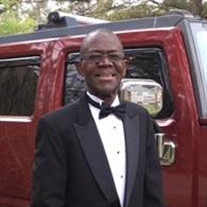 Joseph Washington was called from labor to reward Tuesday, November 14, 2017, at his home in Columbia after a battle with cancer. Born in Mt. Pleasant, SC, on November 8, 1938, he was the sixth child of Christopher and Rosalee Washington, Sr. Joe graduated from Laing High School and attended Morris College in Sumter, SC. Joe frequently referred to meeting his bride of 52 years, Loyvone, as the best thing to happen to him at Morris College. Joined in holy matrimony on July 10, 1965, Joe and Loyvone were blessed with two beautiful daughters: Jolonda and Leneé. Accepting Christ as his Lord and Savior early in life, at the age of 12, Joe, along with his brother Harold and a cousin joined Olive Branch AME Church and were assigned to Class #15. Joe was drafted into the U.S. Army in January 1962, an occurrence that he would also refer to as one of the best of his life. He served over twenty-two years, with assignments in Texas, California, Maryland, Georgia, Virginia, Columbia, Germany and Viet-Nam. With an interest in history, Joe not only learned some of the customs and traditions of Germany but he taught himself the German language, took the test and had the German language added to his Military Specialty. Joe’s lifelong love of cars and racing led him to take advantage of his time in Germany, and weekends would find him traveling to races at Zolder, Belgium, Hockenheim and Neurnbergring Germany, 24 hours Lemans, Monoco, Monte Carlo, Brands Hatch, England, and Monza, Italy, whenever he could. Even with plans to stay in the military indefinitely, Joe began missing his family and decided it was time to be home full time. While Vone was doing a fantastic job, he wanted to be home while the girls were growing up, to attend their school functions, piano lessons, dance lessons and just be Daddy. So, in June 1984, he folded up his uniform and retired. Joe was extremely proud of the fact that after he retired he found a job, studied and for one year traveled to Shaw Air Force Base, Sumter SC to complete his studies and earned his BA degree from St. Leo College, Florida in 1986. After attending Reid Chapel AME Church for many years, on December 4, 2004, he joined as a member. He felt he could still carry a tune so he joined the Senior Choir and served as its president from 2005 to 2011. He also lent his voice to the Concert Choir and was a pretty good fish cooker. Joe volunteered with the Boy Scouts and felt blessed to be able to work with and be a part of the lives of these young men. Joe had many highlights in his life: meeting and marrying his college sweetheart, being blessed with two wonderful daughters and God allowed him to see the birth of granddaughters Nicole and Kristen. Joe would also like for you to know that he loved to cook, he tried to keep a little garden and next to God and his family, he loved cars. Known as the helping hand in the community, Joe started picking up bicycles, fixing them up and giving them away. He also kept some for the younger family members to ride when they visited, extending this hobby into motorized scooters. Even the grown-ups enjoyed this collection. In addition to his parents, Joe was preceded in death by his brothers: Christopher, Jr., Benjamin, and Harold: and his sister Sarah. He leaves to cherish precious memories his beloved wife Loyvone; daughters: Jolonda (Sean) Washington and Leneé (Frederick) Madden, all of Charlotte, NC; three grandchildren: Nicole Madden, Kristen Madden, both of Charlotte, and Kiyah Toler, all of Greensboro, NC; two sisters: Mary Washington and Martha Washington, both of Mt. Pleasant; and a host of nieces, nephews, in-laws, and other relatives and friends.

Joseph Washington was called from labor to reward Tuesday, November 14, 2017, at his home in Columbia after a battle with cancer. Born in Mt. Pleasant, SC, on November 8, 1938, he was the sixth child of Christopher and Rosalee Washington, Sr.... View Obituary & Service Information

The family of Joseph Washington created this Life Tributes page to make it easy to share your memories.

Joseph Washington was called from labor to reward Tuesday, November...