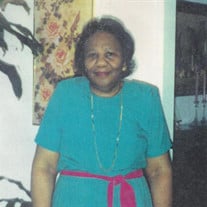 Josephine R Black departed this earthly life on Monday, January 11, 2016 at Palmetto Health Baptist in Columbia, South Carolina. Born in St. Matthews, SC on July 8, 1937, she was the youngest of six children born to the late Henry and Ada Blanche Walker Richardson, Sr. Mrs. Black was a graduate of C.A. Johnson High School in the Class of 1957. A year later, she met the love of her life, Mr. J.C. Black and on October 23, 1959, they were united in holy matrimony. Their loving union was blessed with three children: Ronald, Angela and Chandra. She was an excellent wife and mother who was devoted to the well-being of her family. She was employed at Horsman Doll Factory in West Columbia for many years until its closure and later was a self-employed domestic worker. In her spare time, she devoted her life to the care of her beloved husband and children. She was passionate about cooking and baking and each of her children had a favorite dish that ranged from broccoli casserole to banana pudding and punchbowl cake. Mrs. Black possessed a special green thumb with her plants and also enjoyed doting on her grandchildren who were the apple of her eye. In addition to her parents and her son Ronald, she was preceded in death by four siblings: Rosa Brown, Henry “Bubba” Richardson, Rubin Richardson and Lucious Richardson. She leaves to cherish precious memories, her loving husband of fifty six years, J.C. Black of the home; devoted children: Angela (Alvin) Josey and Chandra Black all of Columbia, SC; four grandchildren: Joron Black, Justin Black, Ka’Shon Josey and Dominique Black; one sister, Earnestine Middleton also of Columbia and a host of nieces, nephews, other relatives and friends.

The family of Josephine R Black created this Life Tributes page to make it easy to share your memories.