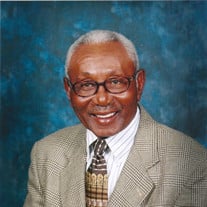 Joshua Neal, Jr., 91 departed this earthly life on Sunday, September 4, 2016 at Palmetto Health Tuomey in Sumter, S.C. Born on July 12, 1925, he was the fourth of six children born to the late Joshua Neal, Sr. and Jimmie Lee Warley Neal in the Privateer Township of Sumter, South Carolina. He attended Sumter County Public Schools, where his father was principal. At the age of 14, after the death of both his parents, he and his four brothers began working to support themselves in a parentless household. This helped all of them to become self- sufficient and hardworking. A faithful family member, Martha B. Leneau , adopted these young men into her family and raised them as her own sons. Mr. Neal was a lifelong resident of Sumter, S.C. . He grew up in New Bethel Baptist Church, where he served on the Trustee Board and participated in Church School. The current church sanctuary was built by the Neal Brothers. In 1944, Joshua was drafted into the United States Army and later served in the United States Air Force. After receiving an honorable discharge, he began working in construction as a carpenter. In 1952, Mr. Neal became a construction superintendent for Dan Trotter Construction of Sumter. In this role, he supervised commercial and residential projects in South Carolina. He worked for Trotter Construction until 1955; then he decided to start his own business. His first contract to build a home was for the late Rev. R. W. Stallings of Sumter. Mr. Neal then built several houses along North Main Street for ministers, formerly known as “Preachers Row”, Runnymede subdivision and numerous other homes throughout the state of South Carolina. On June 15, 1955, he married the former Miss Eula Mae Holliday. To this loving union, two sons were born, Wilfred and Edwin. In 1960, he convinced his brother Birnie to become his partner in the construction business. According to Mr. Neal, his brother Birnie was the best trim carpenter and cabinet man in town. The business was incorporated and Neal Brothers Builders was established. For the next 56 years, Neal Brothers would develop a reputation for quality construction, honesty and integrity. They also created jobs and taught their trades to many young people. Their excellent reputation would spread and they were able to build many homes and small commercial projects throughout the midlands of South Carolina. Other builders would frequently call on them for assistance with complex construction projects. The company by any measure became a true success story. In 1970, the company built an office and warehouse facility at 1361 Pocalla Road and provided a baseball field for community recreation. The corporate office remains at this location and the baseball field is still being used for adult and youth sports. In 1996, Birnie Neal passed away and his son Al became more active in the business. Finally, Joshua’s son Wilfred entered the business in 2001 and is currently continuing the legacy. In addition to his parents, he was preceded in death by four brothers: Dewey, Birnie, Douglas, and Albert; one sister Ophelia; one foster brother, Isaiah Leneau, and three foster sisters: Anna Blanding, Gladys Miott and Martha Cureton. Those left to cherish precious memories are his beloved wife of 61 years, Eula Mae Neal of the home; two sons, Wilfred (Karen) Neal , Charlotte, NC, Edwin (Marie) Neal, Rock Hill, SC ; four grandchildren, Brandon (Kerbie) Neal, Christopher, Trace Neal, and Tessa Neal; two great-grandchildren, Kennedy Neal and Caleb Neal; three sister-in-laws, Dorothy Neal, Long Island, NY, Marie (Ike) Taylor, Sumter, and Mary Lou Holliday, Baltimore, Md.; five brother-in-laws: Louis (Audrey) Holliday, Baltimore, Md., Claude (Beulah) Holliday, Fort Lauderdale, Fl., James (Vivian) Holliday, Sumter, Herbert (Vertell) Holliday, Owings Mill, MD, Alfred (Deloris) Holliday, Severn, MD.; three foster sisters, Lena Rice, Brooklyn, NY, Edna Newton, Balitmore, MD and Jimmie Lee Osborne, Newman, GA.

The family of Joshua Neal Jr. created this Life Tributes page to make it easy to share your memories.

Send flowers to the Neal family.