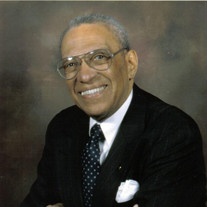 Dr. Julius Samuel Scott, Jr. was a man of great accomplishment and many talents &#8211; a devoted husband, father, mentor, educator, humanitarian, and church leader. Yet he was also a man of great humility who was able to mentor students, minister... View Obituary & Service Information

The family of Julius Samuel Scott Jr. created this Life Tributes page to make it easy to share your memories.