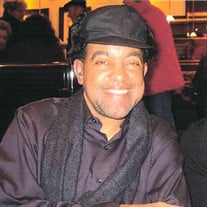 OBITUARY Julius Sherard Scott, lll 1955-2021 Julius S. Scott, lll, renowned scholar of African American and Caribbean history, professor at the University of Michigan, author, and above all, a gentle soul, passed away on December 6, 2021 in Ann Arbor, Michigan. Dr. Scott was born July 31, 1955 in Marshall, TX, to Julius and Ianthia (Ann) Harrell Scott. He attended MacGregor Elementary School in Houston Texas as one of the first Black students in its newly-integrated first grade class. Later, he became one of the first Black students to enroll at Indian Springs School, a private boarding school in Birmingham, Alabama, from which he graduated in 1973. Dr. Scott matriculated at Brown University, in Providence, Rhode Island, and graduated magna cum laude with honors in History in 1977. He earned a PhD in history at Duke University in 1986. Among his awards and fellowships are the Lilly Endowment Teaching Fellowship, the Mellon Postdoctoral Fellow in the Humanities at Rice University and The Frantz Fanon Outstanding Book Award in 2020. Dr. Scott was an extremely popular lecturer who was keenly dedicated to teaching and to mentoring budding historians. After earning his PhD, he went on to teach at the University of Illinois (Chicago), Duke University, New York University and lastly the University of Michigan. Dr. Scott’s co-edited book Origins of the Black Atlantic: Rewriting Histories was released in 2010, followed by the widely celebrated book from his PhD dissertation, The Common Wind: Afro-American Currents in the Age of the Haitian Revolution (2018), which was awarded the Museum of African American History Stone Book Award in 2019 and the Special Achievement Award from Yale University’s Gilder Lehrman Center for the Study of Slavery, Resistance, and Abolition. The University of Michigan Clements Library has established a memorial fellowship in Dr. Scott’s name. Dr. Scott (Scotty) should be remembered as a vibrant, brilliant and energetic scholar. It was always with courage, fortitude, and grace that he faced his many health challenges. Dr. Scott was preceded in death by his father, Dr. Julius S. Scott, Jr. and is survived by his mother Ianthia (Ann), his brothers David Kumar and Lamar King, his long-time partner Elisha Renne, and a number of relatives, friends and colleagues. In memory of Dr. Scott, the family suggests contributions be made to the University of Michigan Clements Library in support of the research fellowship named in his honor. William L. Clements Library University of Michigan 909 South University Avenue Ann Arbor MI, 48109 https://maizeraise.umich.edu/o/university-of-michigan/i/maizeraise/s/julius-s-scott-iii-fellowship-in-caribbean-and-atlantic-history

The family of Dr. Julius Sherard Scott III created this Life Tributes page to make it easy to share your memories.