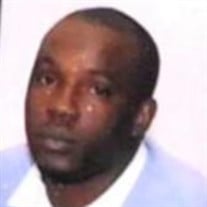 "And God shall wipe away all tears from their eyes; and there shall be no more death, neither shall there be any more pain; for the former things are passed away.” Revelation 21:4. Justin Ulysses “JB” Burson, 38, entered into eternal rest on Friday, October 15, 2021. Born on March 1, 1983, he was the baby boy born to Claude Burson, Jr. and the late Rosetta Davis Burson. “JB” as we knew him, attended the schools of the former Sumter School District 17, where he excelled in basketball at Sumter High School. “JB” was chosen to play basketball at Hoops Smart USA in Hawaii to represent his school, community, state and region. “JB” attended the College of Coastal Georgia-Brunswick and South Carolina State University. “JB” joined and was baptized at Westminster Presbyterian Church USA (Alcolu, SC). “JB” was a lover of the gospel of Jesus and was not ashamed to proclaim the words of the Lord. “JB” enjoyed coaching and teaching the game of basketball. He coached for Sumter County Parks and Recreation for a number of years. “JB” also worked at Subway and several local car dealerships. Justin’s three boys, Jaylin, Josiah and Jeremiah were the pride and joy of his life. He instilled in them the value of learning sports, especially basketball, but made sure their education was a first priority. In addition to his mother, Justin was preceded in death by his maternal grandfather, Joe Davis, Sr; his paternal grandparents Claude Burson, Sr. and Leona Henderson Burson; and five uncles. Those left to cherish the memories of Justin are: his father, Claude Burson, Jr.; his three boys Jaylen, Josiah and Jeremiah; the mother of his children, Ebony Washington; maternal grandmother, Katie W. Davis; one sister, Rochelsa Burson; two nephews, Xzavian Burson and Kareem Burson-Wells; one niece, Karin “Rainy” Busron-Wells; one great-nephew, Mason Burson; his best friend, Craig Ingram and a host of other relatives and friends.

"And God shall wipe away all tears from their eyes; and there shall be no more death, neither shall there be any more pain; for the former things are passed away.&#8221; Revelation 21:4. Justin Ulysses &#8220;JB&#8221; Burson, 38, entered... View Obituary & Service Information

The family of Mr. Justin Ulysses Burson created this Life Tributes page to make it easy to share your memories.

&quot;And God shall wipe away all tears from their eyes; and there...

Send flowers to the Burson family.