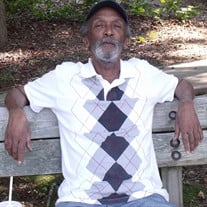 Kelly Miller Harvey, Jr., was born April 14, 1946, in Columbia, SC, to Miriam Roberts Harvey and Kelly Miller Harvey, Sr. The eldest of three sons, “Chunky” as he was called by the family, graduated in the C.A. Johnson High School Class of 1964. He attended Hampton Institute, matriculating with a Bachelor of Architecture in 1969, as well as receiving both the Silver Medal and Award of Merit from the American Institute of Architecture (AIA). Kelly would go on to further his studies in the Master of Architecture program at the University of Nebraska where he also taught undergraduate courses in architecture. His chosen profession would lead him to work in Milwaukee, WI; Baltimore, MD; Alexandia, VA; and Washington, DC, before bringing him back home to Columbia. It was here in his hometown that Kelly, along with two close friends, founded ARCHIZIGN, a full service architecture, design, and planning firm as the first (and at that time) only fully licensed African-American owned and operated architectural firm in the state of South Carolina. Kelly was the acting president of ARCHIZIGN and chief designer. Additionally, he served as Chairman of the Richland County Building Board of Adjustments and Appeals, as a member of Columbia’s Historic Downtown Planning Commission, and was appointed to the Columbia Riverfront Planning Committee by Mayor Kirk Finley. Kelly would also share his knowledge and experience with the younger generations, teaching at architecture at Midlands Technical College and engineering at South Carolina State University’s Shaw Air Force Base campus. The morning of June 10, 2016, Kelly Miller Harvey, Jr., passed into eternal rest. He is survived by his wife, Shirley Bryant; brother, Brian Harvey; and his four sons and their families: Reginald Harvey and son Jhayden; Eric (Tameka) Harvey and daughter Laurel; Alan Harvey; and Roderick (Amber) Hankins and son, Brennan Hankins, and daughter, Kerigan Hankins.

Kelly Miller Harvey, Jr., was born April 14, 1946, in Columbia, SC, to Miriam Roberts Harvey and Kelly Miller Harvey, Sr. The eldest of three sons, &#8220;Chunky&#8221; as he was called by the family, graduated in the C.A. Johnson High School... View Obituary & Service Information

The family of Kelly Miller Harvey, Jr created this Life Tributes page to make it easy to share your memories.

Send flowers to the Harvey family.