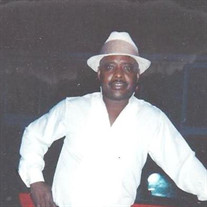 Kenneth Arthur Powell, departed this earthly life on Wednesday, April 6, 2016, at his residence in Batesburg, South Carolina. Born in Columbia, SC on September 26, 1961, he was the fourth of six children born to Mattie Mae Roach Powell and the late Arthur Lee Powell. Mr. Powell was a graduate of Dreher High School in the Class of 1980. He was a life-long member of his family’s church, First Nazareth Baptist Church. Kenneth was employed for over twenty-five years with Building and Grounds for Richland County Government. His work ethic was so amazing that after becoming disabled, he took on more responsibilities. He was never selfish and would always forsake himself for the needs of others. He met the love of his life, Ethel Butler in 1990 and they married on September 26, 2009. Their loving union blended their sons Brandon and Kendall, affectionately known as “Duke” into a close-knit family. Not only was he committed to his wife and children, but he was attentive to the needs of many family members, especially his mother and mother-in-law. He was an excellent provider; loving husband, father, son and brother, who was devoted to the care and well-being of his family. The definition of “Family” went beyond bloodlines. He never met a stranger! Kenneth possessed a heart of gold, a sense of humor and a unique approach with children and adults alike. In his spare time, he enjoyed playing checkers and rooting for his favorite team-The San Francisco 49ers. In addition to his father, Arthur Lee Powell, he was preceded in death by his sisters: Sylvia Ann Barnes, Audrenia Hutchins; maternal grandparents, Mitt “Buster” and Lucretia Roach and paternal grandparents, Lige and Fannie Powell. Mr. Powell leaves to cherish precious memories, his devoted wife, Ethel Marie Butler Powell of the home; sons, Brandon Arthur Powell of Columbia and Kendall Arthur Powell of Batesburg, SC; his beloved mother, Mattie Roach Powell and siblings, Thomas (Rhonda) Bell, Gerald Powell and Felicia (Frederick) Roberts all of Columbia, SC; sisters-in-law: Cleavie (Ivy) Morris, Cornelia (Herman ) Briggs, Aleathea (Sandy) Thompson and Rosa Johnson; brothers-in-law: Joseph Lee Butler, Larry Butler and Allen Butler ; aunts, uncles, nieces, nephews; a host of other relatives and friends.

Kenneth Arthur Powell, departed this earthly life on Wednesday, April 6, 2016, at his residence in Batesburg, South Carolina. Born in Columbia, SC on September 26, 1961, he was the fourth of six children born to Mattie Mae Roach Powell and... View Obituary & Service Information

The family of Kenneth A Powell created this Life Tributes page to make it easy to share your memories.

Send flowers to the Powell family.