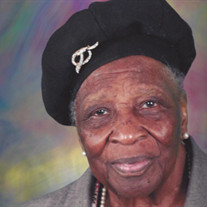 Larlia Champion Olden was called from earthly labor to heavenly reward the morning of Friday, April 13, 2018, at Palmetto Health Richland in Columbia. Born July 27, 1920, in the Wedgefield community of Sumter County, she was the youngest of ten children born to the late Charlie and Elnora Johnson Champion, Sr. She attended Reese Chapel School (later St. Michael School, and now presently DeLaine School) She was a lifelong member of Wayman Chapel AME Church where she served in the following capacities: Women’s Missionary Society, the Stewardess Board #6, member of the Wayman Chapel Crafting Bees, and she was the Mother of the Church. She was a founding member of the Wedgefield DeLaine Community Center and served as Secretary-Treasurer for many years. She was also the oldest member of the Women of Wisdom Club in Columbia for the last twelve years. She was affectionately called "Mom" or "Mother" by all. She loved to garden (any flowers) and was also seen with a smile on her face ready to share her special light with all. She also loved to crochet, and many have dishcloths lovingly made. In addition to her parents and her husband, John C. Olden, she was preceded in death by a son, Frank Olden; three grandchildren: Allen Christopher Jenkins, Sandra Denise Jenkins, and Willis Jenkins, Jr.; a great-grandson, Christopher Jenkins; three sisters: Julia Colclough, Maria R. Barnwell, and Mabel Wright; six brothers: David Champion, Charlie Champion Jr., William Champion, John Henry Champion, Horace Champion, and Samuel Champion; two daughters-in-law: Arlene R. Olden and Joyce B. Olden; and three sons-in-law: Isaiah Jenkins, Willis Jenkins, and Edward Neal. Surviving are five daughters: Ruth Jenkins, Carrie Jenkins, Emma Olden-Neal, Eleanor Olden, Janice Olden, all of Columbia; two sons: John Calvin Olden, of Hopkins, and Thomas Olden, of Wedgefield; twelve grandchildren; nineteen great-grandchildren; sixteen great-great-grandchildren; one great-great-great-grandchild; and a host of nieces, nephews, cousins, other relatives and friends who will miss her presence in their lives. The family would prefer potted plants rather than flowers.

Larlia Champion Olden was called from earthly labor to heavenly reward the morning of Friday, April 13, 2018, at Palmetto Health Richland in Columbia. Born July 27, 1920, in the Wedgefield community of Sumter County, she was the youngest of... View Obituary & Service Information

The family of Larlia Champion Olden created this Life Tributes page to make it easy to share your memories.

Larlia Champion Olden was called from earthly labor to heavenly...

Send flowers to the Olden family.