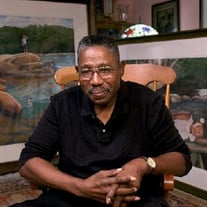 Larry Francis Lebby was born September 9, 1950, in Denmark, South Carolina to the late Edward Emerson Lebby and the late Irene Barbara Johnson Lebby. He departed this life on July 21, 2019 at Providence Hospital in the presence of loved ones. His early life was spent in Dixiana with his parents and four brothers. He attended the public schools of Lexington County finishing high school at Airport High in 1969 as one of the first students to integrate the school. He developed and honed his artistic skills at Allen University in Columbia and the University of South Carolina, earning a BA in 1973 and a Master of Fine Arts degree in 1976. His works have been exhibited in numerous museums and galleries like the U.S. Embassy, Manila; The U.S. Rotunda, Washington D.C.; The White House, Washington D.C.; The U.S. Executive Building, Washington D.C.; The World Bank, Washington D.C.; The High Museum, Atlanta, Georgia; The Huntsville Museum, Alabama; The University of Alabama; The University of Georgia, Athens, Georgia; The Smithsonian Institution National American Museum; The Columbia Museum of Arts and Sciences; The Ann Jacob Gallery; The David C. Driskell Center; The University of Maryland; The University of North Carolina Museum; The Edison Museum, Fort Myers, Florida; The Harvey B. Gantt Center for African America Culture; The University of South Carolina McKissick Museum; The Moca Museum of Contemporary Art, Jacksonville, Florida; The Tibb Gallery, Washington D.C.; and The Teatro Club, Rome, Italy. His most recent exhibit was in Manila, and a number of his works have been collected by such luminaries as Vanessa Williams, Oprah Winfrey, Eddie Murphy, James Earl Jones, Gregory Peck, Roberta Flack, and Toni Braxton. He was most recently commissioned to paint the posthumous portrait of the late Reverend and Senator Clementa Pinckney in 2016. Larry was a servant to the community and the arts. He served on the Renaissance Foundation Board, was recipient of The University of South Carolina’s Distinguished Black Alumni Award, and an involved-member of the Center for Community and Family Transitions Board. He has also served on the board of the South Carolina Diabetes Association, the South Carolina Arts Commission, and the Governor’s Task Force for the Arts. In addition to his parents, Larry was preceded in death by his brothers: Robert Lebby, Gary Lebby, and Michael Lebby; and a sister, Sandra Lebby. Larry leaves to cherish his memory his wife Gloria Harris Lebby; three daughters: Katrina Long Lebby, Lanier Lebby, and Amanda (Johnny) Warden; two sons: Bakari Francis Harris Lebby and Akida Amani Lebby; three grandchildren, Brittany Chapman, Diamond Robinson, and Emerson Clavaun Anderson Lebby; two brothers: Gerald Wayne Lebby of Dixiana and Kenneth Bernard Lebby of Columbia; two sisters-in-law: Mary P. Lebby of Gaston, SC, and Kathy R. Lebby of Oak Ridge, NC; former sister-in-law Rev. Freddie M. Lebby of West Columbia; one aunt, Kathleen Lebby Faust of Denmark, SC; and a host of nieces, nephews, cousins, and friends.

Larry Francis Lebby was born September 9, 1950, in Denmark, South Carolina to the late Edward Emerson Lebby and the late Irene Barbara Johnson Lebby. He departed this life on July 21, 2019 at Providence Hospital in the presence of loved ones.... View Obituary & Service Information

The family of Larry Francis Lebby created this Life Tributes page to make it easy to share your memories.

Send flowers to the Lebby family.