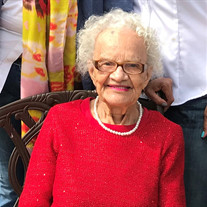 Larsene Etta Green March moved peacefully from labor to reward in Columbia Saturday, April 14, 2018, surrounded by her family. Born March 19, 1924, to the late Joseph Nathaniel and Etta Larsene O'Neal Green in Jenkinsville, South Carolina, she was the eighth of eleven children. She was the granddaughter of the late Frances and Isaac O'Neal Green and the late Joe Smith and Grace Martin-Green. Larsene attended and graduated from the St. Barnabas Episcopal Church School, where she played basketball as a small forward before attending Allen University in Columbia, South Carolina. Larsene married the late Henry March Jr., and from their union was blessed with three children: Curtis, Deborah, and Corliss. She was so proud of her children and their professional accomplishments. Larsene, with her husband Henry, raised their family in the Greenview area of Columbia. After being widowed for twenty years, Larsene later married the late Daniel Thompson, Sr. Larsene was strong in her Christian faith that began at St. Barnabas Episcopal Church, Jenkinsville, and after she and Henry relocated to Columbia, they joined St. Luke's Episcopal Church where she became an active member with the Episcopal Church Women, the Daughters of the King, and as a Sunday School teacher. Although she was very independent, Larsene and Henry were dedicated to each other, continuously working hard while supporting their family with love, perseverance, and a strong faith in God. She enjoyed traveling with her family and friends immensely. Her heart was bigger than life itself; she never met a stranger, and was always full of joy, humor, and kindness. In meeting and greeting people with her infectious smile encouraging others, she would say "Oh, what a blessing!" She was an avid sports fan of baseball and basketball. A talented seamstress, Larsene designed clothing for herself, family members, and friends. She had style, grace, and class, donning her signature red hats. She also loved gardening; she grew the best vegetables and planted beautiful flowers. In addition to her parents and spouse, she was preceded in death by three brothers: Walter Green, James Green, and Lloyd Green; and four sisters: Frances Green, Grace Green Black, Sterlita Green Caldwell, and Elise Green Grier. Larsene, a sweet, sweet spirit leaves her legacy of generosity and kindness; the matriarch of her family, she leaves to cherish loving memories three children: Curtis March of Charlotte, NC, Deborah March-Woodbury of Raleigh, NC, and Corliss (Rudolph) March-Wise of Columbia; four grandchildren: Shonnette (Eric) Howard of Raleigh, Dani'ele (Dwight) Borden of Mine Hill, NJ, Jason (Aneleen) March of Little Falls, NJ, and Rudolph Wise, II of Conshochocken, PA; three great-grandchildren: Gianna LaBanca of Mine Hill, Madison Tiffany Howard of Raleigh, and Leif Alexander March of Little Falls; three brothers: Rev. Joseph (Evelyn) Green, III of Norfolk, VA, Adolph (Joan) Green of Jenkinsville, and Leon (Annie) Green of Columbia; two brothers-in-law: Frank (Mary) March of Blair, SC, and Mack Arthur (Elizabeth) March of Jersey City, NJ; a special niece, Sandra (Jerome) Morgan-Davis, of Charlotte, NC; and a host of nieces, nephews, other relatives and friends. In lieu of flowers, please make a gift of your choice to the following: St. Barnabas Episcopal Church, St. Luke's Episcopal Church Endowment, or Alzheimer's Association.

The family of Larsene Etta Green March created this Life Tributes page to make it easy to share your memories.

Send flowers to the March family.