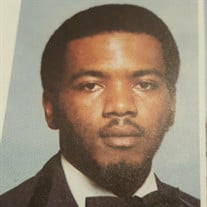 Lenord Bernard Sanders, known as Bruce by all who knew and loved him, bid farewell to his earthly home on Friday, December 29, 2017, at Palmetto Health Richland Hospital in Columbia, South Carolina. Bruce’s life was not as long as those who love him prayed for it to be, but he touched many other lives while he was with us. Born in Sumter, South Carolina, on March 22, 1959, he was the third of eight children born to the late Garland Edward Sanders and Mildred Osteen Sanders-Taylor. He was a 1977 graduate of Hillcrest High School in Dalzell, South Carolina, and earned a Bachelor of Science Degree from South Carolina State College in Orangeburg, South Carolina; he enlisted and proudly served his country in the United States Army. A born educator, Bruce enjoyed engaging children and helping them grow mentally and physically. To assist in these endeavors, he became a certified health and physical education instructor, coach and, after teaching, later became an On the Road (OTR) driver in the vehicle transport division. Bruce was a member of Congruity Presbyterian Church in Gable, South Carolina and served as a mentor for girls and boys in his community. Further developing his love of helping others, Bruce became a proud member of the Kappa Alpha Psi Fraternity in 1980. Bruce is survived by his loving siblings: LTC Phillip (Carolyn) Sanders, Gwendolyn (Anthony) Blackwell, Dr. Patricia Sanders-Fears (Joseph), Jacqueline Sanders-Hart, Sharion Sanders-Davis (Gerald), Sonya Sanders, Tonya Sanders (Eugene) Commander, Darryl Bufford; thirteen nieces and nephews; nine great nieces and nephews; and a host of loving relatives and close friends.

Lenord Bernard Sanders, known as Bruce by all who knew and loved him, bid farewell to his earthly home on Friday, December 29, 2017, at Palmetto Health Richland Hospital in Columbia, South Carolina. Bruce&#8217;s life was not as long as those... View Obituary & Service Information

The family of Lenord Bernard Sanders created this Life Tributes page to make it easy to share your memories.

Lenord Bernard Sanders, known as Bruce by all who knew and loved...