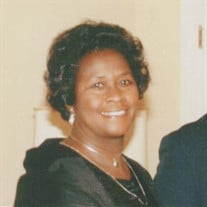 Leola Evelina Glisson Martin departed this earthly life on Tuesday, January 12, 2021, at her residence in Sumter, South Carolina. Born in Stateburg, South Carolina, she was one of ten children born to the late Rev. Jacob Glisson (the son of Jacob Glisson, Sr., and Ms. Bina Owens of Stateburg and Privateer) and Ms. Lela Samuel Glisson (the daughter of the late Frederick Samuel and Lela Jones of Eastover and Stateburg, SC). Educated at F. J. De Laine Elementary School in Wedgefield, SC, she attended Morris College High School, and was a graduate of Morris College in Sumter. Mrs. Martin was a lifelong educator in the Lee County School District and Sumter County Public School District II. She taught at Mayewood Middle School, Ebenezer Elementary, Lower Lee Elementary and Shaw Heights Elementary Schools for over thirty-two (32) years and continued to serve as a substitute teacher after her retirement. As a youth, she was a member of Wayman Chapel African Methodist Episcopal Church. She joined the congregation of Emmanuel Methodist Episcopal Church in the 1960s, after her marriage to Frank C. Martin, Sr. The congregation later became Emmanuel United Methodist Church, where she was active in several church organizations including: President of the United Methodist Women, Vice-President of the Women’s Society of Christian Service; Secretary of the Local Church Activities Committee; Chairperson of the Christian Personhood Committee; Chairperson of the Nominating Committee; Chairperson of the Membership Committee; and District Treasurer of the Women’s Society of Christian Service for the Sumter District. During her tenure as Chairperson of the Membership Committee, she recruited and organized a circle of eleven young women to continue the legacy of historic Emmanuel United Methodist Church. Those young women became members of the Methodist Women’s organization and currently continue to work in that capacity. Mrs. Martin’s involvement in other organizations included serving as Chairperson of the Church Society; Secretary and member of the Emmanuel UMC Senior Choir; member of the Council on Ministries; member of the Church Administrative Board; member of the Church Finance Committee; and member of the Status and Roles of Women Committee. In addition to the activities listed above, she also served as a teacher in the Sunday School, and the Summer Bible School Program, as well as the Emmanuel After-School program, well into the new millennium. She served in the community as a longstanding member of the Sumter Alumnae Chapter of Delta Sigma Theta Sorority, Incorporated, a dedicated member of the National Council of Negro Women (NCNW,) and the National Education Association (NEA.) In addition to her parents and husband, Frank C. Martin, Sr. of Sumter, she was preceded in death by one sister, Jeannetter Crowell, and nine brothers, Abraham, Luther, Jessie, Jacob Jr, James, Joseph, Frank, Clifton, and Thomas. She is survived by her three loving children, Theresa (Tede) Martin-Johnson; Dr. Frank C. Martin, II and Anita Cautia Martin; two grandsons, Michael Edgar Johnson and Zachary Miles Johnson; and a host of nieces, nephews, and cousins who mourn her passing. Attention: The service will be lived streamed on our Facebook page, Palmer Memorial Chapel, Inc. In lieu of flowers please make donations to Emmanuel United Methodist Church or the Delta Sigma Theta Sorority Incorporate Scholarship Fund. Omega Omega (ΩΩ) service presented Wednesday January 20, 2021 at 7pm online by the distinguished Ladies of Delta Sigma Theta Sorority, Incorporated

Leola Evelina Glisson Martin departed this earthly life on Tuesday, January 12, 2021, at her residence in Sumter, South Carolina. Born in Stateburg, South Carolina, she was one of ten children born to the late Rev. Jacob Glisson (the son of... View Obituary & Service Information

The family of Mrs. Leola Glisson Martin created this Life Tributes page to make it easy to share your memories.

Send flowers to the Martin family.