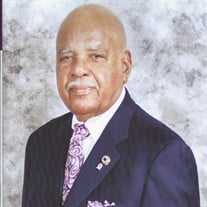 A bright sun arose in Lancaster, South Carolina, on June 18, 1932, when Leon Bernard Babridge was born to the late Earl Thomas Babridge, Sr. and the late Mattye Wells Babridge. He was the eldest and only brother of five children born to Mattye and Earl. He took his position seriously and always looked out for his four sisters. He peacefully departed this earthly life on Sunday, December 20, 2020. He is now in God’s arms and with his beloved. From an early age, Leon was industrious, committed, spiritual and civic-minded. He responsibly performed his delivery job for a pharmacy, riding his red bicycle all over Lancaster. In addition, he worked with his father who was a plaster contractor. Leon also played high school football and was an active Boy Scout. He was very proud of his job cleaning his home church, Pleasant Ridge Presbyterian, and ensuring it was properly warmed for services. He took to multitasking at an early age. Leon graduated from Lancaster Training School (LTS) in 1950. He then attended South Carolina State College (now University) where he earned a Bachelor of Science degree in Industrial Engineering in 1954. Having served in the ROTC program, upon graduation Leon entered the United States Army as a Second Lieutenant where he served as a commissioned officer for two years. While in the Army, he served tours of duty in Fort Benning, Georgia, Fort Oak, California, and for thirteen months in Alaska. After leaving active duty, he served nineteen years as a Captain in the United States Army Reserves. In addition to his degree from South Carolina State, he enhanced his educational training while attending the University of South Carolina, Clemson University and Stout State College in Wisconsin. Leon had a varied professional career. He taught and coached in Blackville, South Carolina, as well as in Columbia. He was also employed by the Brookland-Cayce school system as a teacher of Diversified Education, providing vocational education and coaching. He worked at Benedict College as well as the South Carolina Department of Education, where he worked with migrant workers. Subsequently, in 1973, Leon was hired by the federal government as a construction analyst with the Department of Housing and Urban Development (HUD), where he was named Employee of the Year 1993. In his spare time, Leon refereed football. Although he officially retired from HUD, Leon never retired; he remained active as a consultant with banks on many building projects. He was skilled in architecture and building crafts. This is prominently demonstrated in the beautiful home he designed and built, especially in the artistry of the cabinets and bookcases. He was employed by others to provide project plan designs. Leon met the love of his life, the late former Sophia Elizabeth DuBose, while she employed as a Home Economics teacher at LTS and he was still serving in the Army. She repaired the belt of a trench coat brought to her by his sister, one of her students, for him. The rest is history. They married three years later on December 20, 1956. Their loving union was blessed with their only child, Kevin Leonard’o Babridge, Sr., in 1960. They also relocated from Lancaster and built their home in Blythewood, South Carolina, that same year. Until the move to Blythewood, Leon was a faithful member of Pleasant Ridge Presbyterian Church in Lancaster. After the move, he became a member of Ladson Presbyterian and subsequently became an organizing charter member of Northminster Presbyterian Church in 1969. He has faithfully served there as an Elder and in other positions. Leon and Sophia, affectionately called “Tiger” by him, enjoyed travel. Together they travelled extensively to their respective fraternity and sorority events. He was known by the AKAs as “Honey Do Leon,” and she was a Quette. Leon was an ardent member of Omega Psi Phi Fraternity, Incorporated. Sometime ago, he spoke in a speech about one of his high school teachers who frequently wore his Omega sweater. Leon was fascinated by the shield; when reaching out to touch it, Leon was told the shield could not be touched unless he belonged. Since his initiation into Omicron Phi Chapter on May 11, 1957, he has “belonged.” He was truly committed to Omega and what it represents as an organization. Leon has served in many capacities: Chapter Basileus and Vice Basileus; Sixth District Representative; Director for the International Headquarters; Board of Directors Omega Psi Phi Friendship Foundation; Carolina Uplift Foundation; and the list goes on. He has been awarded Omicron Phi Omega Man of the Year, Lifetime Golden Key Award, and Omega’s highest honor – the Eagle Award. In addition, he has many other civic and professional awards. Leon was soft-spoken and compassionate, yet determined and firm. He was very caring. He reached out to others, mentoring many and was always willing to lend a helping hand when needed. All of this speaks to his highly held Christian values. He is responsible for many young men joining Omega with the proper prospective. Others, he helped to get onto the right track and remain there. He truly loved his family and friends; whatever the need, he had your back. To his siblings he was “Call Leon” because they knew he would gently guide and direct without being offensive. He enjoyed life and all its pleasures. Photography was a hobby; he wanted to visually preserve good memories. In his strength of character, he was independent yet humble, grateful for all the care, affection, and concern demonstrated by his loving family and devoted friends. Leon shall be deeply missed. In addition to his parents and beloved bride, Leon was preceded in death by four siblings. He leaves to mourn and celebrate his life his son, Kevin L. Babridge, Sr. of Blythewood; three grandsons: Kevin L. Babridge, Jr., Karl Babridge, and Michael McCants; one granddaughter Alisa Beckett; four sisters: Yvonne Parker, Kathleen Bland, Marjorie Babridge, and Earleen Shannon; five nephews; six nieces; grandnephews; grandnieces; cousins; other relatives and loving friends. The services will be livestreamed on Facebook at the Palmer Memorial Chapel page.

A bright sun arose in Lancaster, South Carolina, on June 18, 1932, when Leon Bernard Babridge was born to the late Earl Thomas Babridge, Sr. and the late Mattye Wells Babridge. He was the eldest and only brother of five children born to Mattye... View Obituary & Service Information

The family of Leon Bernard Babridge created this Life Tributes page to make it easy to share your memories.

A bright sun arose in Lancaster, South Carolina, on June 18,...

Send flowers to the Babridge family.