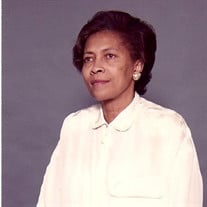 Leona B. Green departed this earthly realm for eternity on Tuesday, July 5, 2016 in Sumter, South Carolina. Born July 22, 1934 in Charleston, South Carolina, she was one of five children born the late Charles Keith and Virginia Gallishaw Keith. Mrs. Green received her former education in the public schools of Charleston. She received a Bachelor’s Degree from Allen University in Columbia, South Carolina and a Doctorate Degree in World History from the University of South Carolina, Columbia. She was employed by Sumter School District 17 as a teacher and retired after many years of service. Her passion for learning was a constant force in both her secular and spiritual life. She was an active member of the Kingsbury Road Church of Christ, Sumter and was a faithful attendant of Sunday School and Bible Study. As a young lady, she was privileged to serve as governess at Martha’s Vineyard in Massachusetts. She also served her community as a member of the Women League of Voters and worked at the voting polls of Sumter. In her spare time, she enjoyed sewing, crocheting and gardening. In 1956, Leona married Benjamin M. Green and of this loving union, three children were born; Winifred, Anthony and Benetta Green. As an Air force family, they traveled extensively in the United States and abroad. In addition to her parents and husband, she was preceded in death by two siblings, Barbara and Charles Keith. Those left to cherish her precious memories are her children: Winifred (John) Rainsford, of Galax, Virginia, Benetta Green, of Atlanta, GA and Anthony (Yvonne) Green of Sumter; five grandchildren, Joshua, Jason, Benjamin , Zachery and Nicholas; one great-grandchild. Naja; two brothers, John and Frederick Keith and a host of other relatives and friends.

The family of Leona B. Green created this Life Tributes page to make it easy to share your memories.

Leona B. Green departed this earthly realm for eternity on Tuesday,...