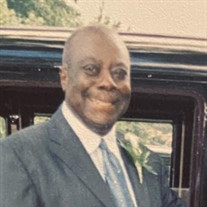 Life Reflections Leroy Allen was a man universally known and loved for his positive energy and enduring spirit. He was the type of person that “never has a bad day”. His warm personality and engaging style made him someone people always wanted to be around. As a result, he made many friends and got along with everyone, the consummate relationship builder. He was always a very reliable person, often counted on, due to his strong willingness to help others. Another frequently referenced trait was his incredible memory and ability to recall specific details from many years ago. It was so astounding, he would sometimes be called “the encyclopedia”. In terms of his activities and interest, without question, his favorite pastime was spending time with his family in any way imaginable, with a special sweet spot for his granddaughters. He was tremendously committed to his faith with an unwavering participation and commitment to the church his entire life. Many Pastors knew they could always count on him. LeRoy was also quite the cook with talents in the kitchen and a special flair for preparing fantastic food on the grill. He was a man who thoroughly enjoyed golf, which he played with many friends and his son. He was a big sports fan highlighted by fun times and many stories from his years with the Football Club watching the SC State Bulldogs. He and Dwayne attended many sporting events together highlighted by a Super Bowl, a Final Four and two US Open Golf Tournaments. He also enjoyed traveling and discovering new places. LeRoy was essentially a living giant who has left a lasting legacy as a Person, Family Man, Father, and Grandfather. Born in Sumter County, he was a son of the late Johnny “Gus” Allen and Ida Bell Sumpter Allen. Educated in the Sumter County public schools, he was a graduate of Lincoln High School, Class of 1955. Afterwards, he served in the US Army for three years, serving half of that in Korea. After returning he graduated from Denmark Technical College in Denmark S.C. which led to a long successful career as an Electrician. After starting his life and family in Sumter SC he lived in Reston Va for nearly 40 years before for returning to Sumter in 1999. Mr. Allen was a life-long member of Allen Chapel A.M.E. Church and served as a member of the Steward Board, the Lay Organization and the Sons of Allen. While residing in Reston, Va. was also a member of Metropolitan AME Church in Washington DC. He was active in the local communities where he lived and held several roles as a member of the Sumterites. In addition to his parents, he was preceded in death by first wife Charity Allen, plus two brothers: Johnny Allen, Jr. and Henry Allen. Survivors are his beloved wife Shirley Allen; his son, Dwayne Allen, Tampa, Fla.; two stepdaughters, Tiffany Dorsey, Covington, GA and Seantell Dorsey, Charleston, SC ; three brothers, Ernest Allen (Roberta), Bayonne, NJ, James Allen, Sumter, SC, and Phillip Allen (Maisy) , Jersey City, NJ ; sister in-laws Gail and Mary Allen both of Sumter, brother-in-law James Singleton, Goldsboro, NC; former daughter-in-law Jennifer Allen, Cincinnati, OH; and granddaughters Lauren Allen, Rockville, MD; Camille Allen, Washington DC; Charli Dorsey , Covington, GA, as well as many relatives and numerous friends including Ann Brewer. ATTN: AT THE DESIGNATED TIME OF SERVICE; TO SEE SERVICE LIVE-STREAMED GO TO FACEBOOK: AND SEARCH: PALMER MEMORIAL CHAPEL,INC. ID#16465588656 Passcode: 662289

Life Reflections Leroy Allen was a man universally known and loved for his positive energy and enduring spirit. He was the type of person that &#8220;never has a bad day&#8221;. His warm personality and engaging style made him someone people... View Obituary & Service Information

The family of Mr. Leroy Allen created this Life Tributes page to make it easy to share your memories.

Life Reflections
Leroy Allen was a man universally known and...

Send flowers to the Allen family.