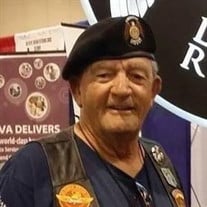 Leroy Dale Moss departed this earthly life on Monday, November 14, 2016, at the Palmetto Health Richland Medical Center in Columbia, SC. Born in Renton, Washington, he was the youngest of 6 children born to the late Arthur Hollenshead and Letha Eva Moss. He was a descendant of Founding Father Benjamin Franklin (sixth great-uncle). He attended Morris High School in San Diego, CA, and enlisted in the United States Marine Corps in 1965. Dale served our country in the Vietnam War where he earned numerous citations including: National Defense Service Medal, Vietnam Service and Campaign Medals, Combat Action Ribbon, and the Presidential Unit Citation. While residing in the state of Washington, he was first employed in the logging industry by Weyerhauser Company and later as a self-employed roofer. In 1970, after relocating to San Diego, CA, he was employed by the Balboa Roofing Company, and while residing in Tuscon, AZ, he was a supervisor for the Ralph Haze Roofing Company. In Arizona, he was also employed as a Corrections Officer and gun crew supervisor in both medium and maximum security facilities. Eventually, Dale retired in South Carolina after being employed by The Prime Group. Dale lived in numerous locales, including: Montana, Illinois, Oregon, Nevada, Arizona, South Dakota, and Wyoming prior to South Carolina. Along the way, Dale found time to indulge his passion for life including: equestrian skills (both English and Western styles), he was a certified Master Scuba Diver who gave instruction at the Himalayan Beach Bay in Mexico. Always one to give back to other service veterans, Dale served as the Adjutant of the American Legion Riders Post #6 and a proud member of the Patriot Guard Riders. In addition to his parents, he was preceded in death by a grandchild, Shanee Marie Ross; two brothers: Robert Moss and Richard Moss; one sister, Anita Charlotte Otto. He leaves to cherish precious memories a son, Leroy Dale Moss, Jr, of Seattle, WA; a daughter Eva Marie Mendoza of Tuscon, AZ; 3 granddaughters: Brandi Miracle of Vancouver, WA, Amanda Miracle of Mt. Vernon, WA, and Juniper Raine Moss, of Everett, WA; a sister Shirley Mae Peterson of Yakima, WA; a brother Loren James Moss of Columbia, SC; and a host of nieces, nephews, other relatives, Patriot Guard Riders from North Carolina, South Carolina, Georgia, and Florida, and other friends. Flowers are welcomed or donations to the American Legion Riders Memorial Fund 200 Pickens Street Columbia, SC 29205

Leroy Dale Moss departed this earthly life on Monday, November 14, 2016, at the Palmetto Health Richland Medical Center in Columbia, SC. Born in Renton, Washington, he was the youngest of 6 children born to the late Arthur Hollenshead and Letha... View Obituary & Service Information

The family of LCpl Leroy Dale Moss created this Life Tributes page to make it easy to share your memories.

Send flowers to the Moss family.