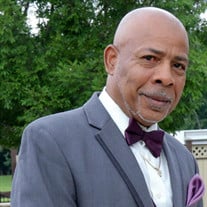 Life Reflections The LORD is my shepherd; I shall not want. He maketh me to lie down in green pastures: he leadeth me beside the still waters. He restoreth my soul: he leadeth me in the paths of righteousness for his name's sake. Yea, though I walk through the valley of the shadow of death, I will fear no evil: for thou art with me; thy rod and thy staff they comfort me. Thou preparest a table before me in the presence of mine enemies: thou anointest my head with oil; my cup runneth over. Surely goodness and mercy shall follow me all the days of my life: and I will dwell in the house of the LORD forever. Psalms 23 Mr. Levon Knight, was born to the late Johnnie Robert Knight and Carrie Louise Harper Knight on February 21, 1960 in Tarboro NC. He departed this life on Tuesday, November 30, 2021, 12:27 p.m. at Prisma Health Heart Hospital in Columbia, South Carolina. He attended the Edgecombe County public schools. He later joined the United States Army following the footsteps of his father and four brothers. During his military service his Military Occupational Specialty was a Motor Transport Operator. Immediately following his service, he became a Heavy and Tractor Trailer Operator. Levon served over thirty-five years of federal service in the capacities of Military Hotel House Keeping Supervisor, Motor Vehicle Transport Operator and lastly Weapons Accountability and Maintenance. During and after retirement from the Federal Service, he continued to work as a School Bus Driver for the Richland II School District until his retirement November 2017. For sixty-one years he lived a wonderful life full of hobbies such as coaching and playing basketball, bowling with military counter parts and family. Before and during retirement he loved golfing, watching his beloved Tar Heels and Patriots. He was a great provider for his family. While stationed at Fort Campbell, Kentucky he was united in Holy Matrimony to Sandra Travis-Knight on March 10, 1989 and their union was blessed with three children. In addition to his parents, he was preceded in death by two brothers, Robert Lee Knight and Keith Derric Knight. Levon leaves to cherish precious memories, his wife Sandra Travis-Knight of Columbia; two sons: Rashad Arnaz Knight Sr., (Kimberly Perkins) of Tarboro, NC; Donnell Travis-Knight of Columbia, SC and one daughter Tracie Shavon Knight of Charleston, SC; three brothers: Johnnie Ray (Dorothy “Dot”) Knight; Melton (Dorothy L.) Knight all of Fayetteville, NC; Kenneth Erric (Dorothy “Dee Dee”) Knight Of Elgin, SC; two aunts Ethel Howell and Beatrice Harper Holliman both of Tarboro, NC; eight grandchildren: Tobais Carr Harper, Tyla’Jah Carr Harper, Cameron Lon, Amaziah Knight, Rashad Knight Jr., and D’Marion Knight all of Tarboro, NC, Elisea Dee Travis-Knight of Hermitage, TN; and London Janaisha Rose Bowman of Columbia, SC; and a host of nieces, nephews, other relatives and special friends. “Weep Not For Me” (To My Lovely Wife and Children) Weep Not for me though I have gone in the gentle night. Grieve if you will, but not for long upon my soul’s sweet flight. I am at peace, my soul at rest. There is no need for tears, for with your love I was so blessed for all those many years. There is no pain, I suffer not the fear is now all gone. Put these things out of your thoughts in your memory I live on. Remember not my fight for breath, remember not the strife. Please do not dwell upon my death but celebrate my life. ~Acknowledgements~ The family of the late Levon Knight wishes to express sincere thanks to everyone for their acts of love, kindness and prayers. A special thank you goes out to Walter Lee Boyd for insisting that his wife Tracy Boyd ride back to South Carolina with Sandra to offer comfort on their journey. A special thank you also goes to Karen Gardner for traveling to Panama Beach, FL to comfort Levon’s daughter Tracie as she received the news of her father passing. Lastly the family would like to thank the Department of Veteran’s Affairs Family for over 16 years of support during many difficult times throughout the years. This list can go on and on, we are truly sorry if we omitted anyone, our hearts and prayers go out to all. May God bless each and every one of you! ~Active Pallbearers~ Terry Sims, David Jones, Charles Dozier, Terry Diggs, Sherman Morris and Michael Tensley. ~Flower Bearers~ Love’s Holiday Couples Group and Friends ~Committal Interment~ U.S. Army Honor Guard Fort Jackson National Cemetery Services will be livestream via Facebook Live at Palmer Memorial Chapel, Inc.

Life Reflections The LORD is my shepherd; I shall not want. He maketh me to lie down in green pastures: he leadeth me beside the still waters. He restoreth my soul: he leadeth me in the paths of righteousness for his... View Obituary & Service Information

The family of Mr. Levon Knight created this Life Tributes page to make it easy to share your memories.

Life Reflections
The LORD is my shepherd; I shall not want. He...

Send flowers to the Knight family.