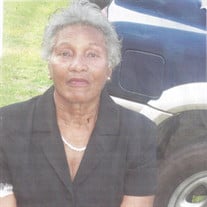 ‘There is a time for everything and a season for every activity under heaven.” A time to be Born: Lillie Mae Davis McFadden, the daughter of the late Willie Davis, Sr and Dorcus Anderson Davis and. was born March 20, 1931 in Alcolu, South Carolina. A Time to Grow and Learn: Lillie Mae received her formal education at Westminster Parochial School, Alcolu, South Carolina and she was a graduate of Sumter High School. Her working career began as a farmer’s wife. She later worked as a domestic engineer for a few years. She began her last line of work at Campbell Soup Company in 1968 until her retirement. A Time to Serve: At an early age, Lillie Mae joined the Westminster Presbyterian Church (USA) where she diligently served in many capacities. She was moderator of the Presbyterian Women Organization, Ordained Deacon, Usher, Sunday School Teacher, Superintendent of Sunday School, Sexton of the Church, Musician for the Church, Moderator of the Hospitality Committee, member of the Senior Choir, Presbyterian Women Secretary and completed any task she was asked to perform without complaints. Lillie Mae was courageous, compassionate, kind, and always willing to lend a helping hand, and her selflessness will always be remembered by her family and all whom she helped. Lillie Mae was a surrogate Mom for many of her family members. She lived by the motto: “If when you give, the best of your service, telling the world that the Savior is come, be not dismayed when men don’t believe you. He’ll understand and say well done”. Lillie Mae was also a member of the YMCA/YWCA Lodge #15 where she served as Recording Secretary until she was not able to perform her duties because of illness. A Time to Die: Lillie Mae lived a long and productive life. She loved her flowers. She nurtured those plants until she was no longer able to care and nurture them. Lillie Mae enjoyed fishing with her fishing buddy Janie M. Barker (String). She also loved to cook. She emulated Jesus in a particular way; she would take a little bit of food and that food apparently multiplied itself. Lillie Mae was able to feed a multitude of people from that pot. She entered Sumter East Rehabilitation Center on August 1, 2014 until November 12, 2020. She was admitted to Prisma Health Tuomey on November 12, 2020. She heard the Master’s call at 5:33 A.M. on November 27, 2020 and took her flight to Heaven. A Time to Mourn: Her memories will be cherished by one son, Augustus (Dolores) McFadden, South Norwalk, Connecticut; four daughters: Martha A. Madden, Riverdale, Georgia, Ruth M. Garth, Bridgeport, Connecticut, Gloria McFadden of Alcolu, South Carolina, and Gertrude M. Washington (Rev. Alonza Washington), Sumter, South Carolina; nine grandchildren and ten great-grandchildren; two Sisters-In-Law, Katie W. Davis of Sumter, South Carolina and Gracie McFadden of Durham, North Carolina; one Brother-in-Law, Leroy Grant, Columbia, South Carolina and a very special family, William, Harriet and Katenell Locklear of Alcolu, South Carolina. She also has twenty nieces, sixteen nephews, and a host of other relatives and friends.

&#8216;There is a time for everything and a season for every activity under heaven.&#8221; A time to be Born: Lillie Mae Davis McFadden, the daughter of the late Willie Davis, Sr and Dorcus Anderson Davis and. was born March 20,... View Obituary & Service Information

The family of Lillie Mae McFadden created this Life Tributes page to make it easy to share your memories.

‘There is a time for everything and a season for every activity...

Send flowers to the McFadden family.