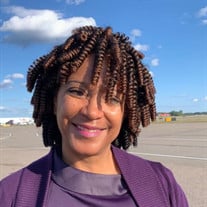 Linda Alfreda Mendenhall-Cooper departed this earthly life on Tuesday, January 26, 2021, at her residence in Elgin, South Carolina. Born on December 1, 1958, she was the daughter of the late Kenneth Elroy Mendenhall and Johncie Smith Mendenhall. As the middle daughter of three, Marian Patricia Mendenhall Simmons and Kim Evette Key called her their beloved sister. She shared a life of love with Stanley Lathorne Cooper whom she married on March 30, 1996. She was the cherished daughter of her mother and father-in-law, Kathryn and Mose Coooper, Jr. Linda attended and graduated from Langley Bath Clearwater High School (1976) in Aiken County, where she was a cheerleader. She then attended South Carolina State College (University) in the Class of 1980 where she graduated with a B.S. in Biology with a minor in Chemistry. At SCSU, she pledged Delta Sigma Theta Sorority, Alpha Xi Chapter as part of the 18 Enchanted Angels 1980 pledge line. She loved the sisterhood of her sorority. Also while at SCSC she was a proud Bulldog cheerleader and continued on the alumni squad, “Bulldog Cheerleader for Life.” She loved cheering , and in many ways she never stopped, as she was always known to cheer others on, in their life endeavors. After she completed her degree at SCSU, she worked with the United States Forestry Service in Ohio, and later she joined Delta Airlines as a flight attendant (June 6, 1981). As a Delta employee, she was based in New Orleans, Dallas, Cincinnati, Salt Lake City, and Los Angeles. She was an on-board Flight Leader and a NBA Charter Flight Attendant. She truly enjoyed being a flight attendant and enjoyed supporting the Los Angeles Lakers. Linda traveled the world with Delta for nearly forty years, travelling both domestically and internationally. This provided her with another opportunity to cheer others on and make them smile. Raised in the church, her faith was strong. Linda lived in Dallas, Texas, for many years where she attended St. Luke United Methodist Church. After moving to California, she attended In His Presence Church in Woodland Hills. Later, she joined Holman United Methodist Church in Los Angeles, where she served on the Staff Pastor Parish Relations Committee (SPPRC). Linda was well-known for her faith, as she would pray for anyone at any time or any place. She loved the Lord and shared her belief with everyone she met. She and her husband Stanley recently left their beloved California to return home to South Carolina, calling Elgin their new home, to start their lives of rest and leisure together (a time cut short). In addition to her parents, she was preceded in this final journey by her beloved in-laws, Kathryn and Mose Cooper, Jr. Linda leaves to cherish precious memories her husband, Stanley Lathorne Cooper; two sisters: Marian Patricia Mendenhall Simmons and Kim Evette Key; three nephews: Zacharay Fitzgerald Simmons, James Chatman Key, and Leroy Antoine Williams, Jr; five nieces: Kiah Renee (Troy) Bachman, Jasmine Evette Swearinger, Janeava Alexander Key, Victoria Elizabeth Brown, and Meredith Cooper Brown; six aunts: Gwendolyn (Monroe) White, Wilhelmina (Matthew, III) Brown, Gloria (Curtis) Richardson, Virginia Mendenhall, Ruby Smith and Bright Smith; two sisters-in-law: Carolyn Cooper (Leroy) Williams and Sandra Gail (Victor) Brown; a host of cousins; her sisters in the B Phi B; her “Bulldog Cheerleaders for Life” sisters; and her sisters in Delta Sigma Theta, Alpha Xi and Pasadena Alumnae Chapters. In lieu of flowers, memorials may be made to the church of your choice. To access the livestream of the service, please go to Facebook.com, search for Palmer Memorial Chapel and like the page. The livestream video will begin at 10:45AM on the day of the service.

Linda Alfreda Mendenhall-Cooper departed this earthly life on Tuesday, January 26, 2021, at her residence in Elgin, South Carolina. Born on December 1, 1958, she was the daughter of the late Kenneth Elroy Mendenhall and Johncie Smith Mendenhall.... View Obituary & Service Information

The family of Linda Alfreda Mendenhall-Cooper created this Life Tributes page to make it easy to share your memories.

Send flowers to the Mendenhall-Cooper family.