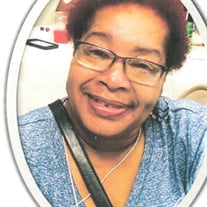 &#8220;I will lift up mine eyes to the hills from whence cometh my help; my help comes from the Lord who made Heaven and Earth.&#8221; A Time To Be Born: Mrs. Loretta Christine Harvin Green, daughter of the late Mr. and Mrs. Rufus and Katie... View Obituary & Service Information

The family of Loretta Christine Harvin Green created this Life Tributes page to make it easy to share your memories.

“I will lift up mine eyes to the hills from whence
cometh my...