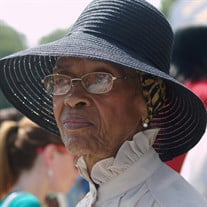 Louise Singleton Grant, 86, wife of the late Rev. Harrison Grant entered into eternal rest on Tuesday, July 14, 2015 at the Country Gardens Living Facility in Union City, Georgia which was named the number one facility in Atlanta for 2015, where... View Obituary & Service Information

The family of Louise Singleton Grant created this Life Tributes page to make it easy to share your memories.

Send flowers to the Grant family.