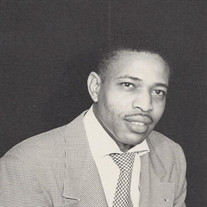 Lovett “Bob” Hardy was born March 25, 1924, in Sawyerville, AL, to the late Lelia Ann Jackson Hardy and John Albert Hardy. He was the ninth of thirteen children born into a family of sharecroppers during rigid segregation in the Deep South. His mother died while he was very young, and Bob’s older sisters took care of him. Like many African-American families of that era, Bob’s family was divided by landowners who continued the cycle of slavery after it legally ended. Young Bob stayed on a farm with one of his siblings, earning a dime a day for picking cotton. One night, his sisters courageously rescued Bob and brought him to Fairfield, Alabama. He then lived in Birmingham and eventually migrated to Chicago and initially living with one of his sisters. While never formally educated, Bob was a smart, curious, and talented man. He worked at a steel mill and eventually secured a position at the Argonne Laboratory, where he retired as a Maintenance Manager. Bob was known as a person who saved his money. He enjoyed listening to jazz and the big city life of Chicago. In the late 1940s, Bob was introduced to the former Sarah Jones by her sister, Mary, a friend of Bob’s family. The two fell in love and married; from this loving union came their daughter Shirley, affectionately known as Peaches, who was the light of their lives. Bob always emphasized to Peaches the importance of a good education, and he worked very hard to ensure she could have the precious opportunities he did not. The Hardys lived on Chicago’s Southside for decades, and when Peaches married Coleman Peterson in 1975, Bob and Sarah truly embraced and loved him as their own son. Coleman and Bob shared a love of music and enjoyed talking about sports and current events. Their relationship was strong, built on a mutual respect and many shared experiences. Bob also took great pride in his grandchildren, Rana and Collin. He and Sarah often hosted them for weeks during summer breaks, establishing a strong bond and creating lasting memories. Through the years, they loved visiting the family at their homes in St. Louis, MO, Bentonville, AR, and Hilton Head Island. Though Bob remained a faithful Chicago White Sox fan, eventually, he and Sarah said goodbye to the Windy City and moved to Hilton Head Island to spend their golden years closer to Peaches and Coleman. "Heaven" is how Bob described the island; he loved the warmth, trees, and fresh air. Coleman dutifully took Bob to get haircuts and “tool around” the island in his convertible for a “guys’ day out” on a regular basis. Bob and Sarah were overjoyed when they became great-grandparents, and cherished each and every visit from the children. Always a fighter, Bob survived two major cancer surgeries, but in recent years, he suffered from chronic obstructive pulmonary disease and pneumonia. On October 10, 2016, the Lord called Bob home to glory at the age of 92 to reunite with both his parents and the ten siblings who preceded him in death. Bob leaves to cherish precious memories his beautiful bride of more than 60 years, Sarah; his daughter Peaches Peterson and devoted son-in-law Coleman Peterson; his grandchildren: Rana (her husband Andy Barclay) and Collin Peterson; his great-grandsons: Coleman Ian Lovett Barclay and Theodore “Theo” Henry David Barclay; his honorary granddaughter Alexis Powell; his sisters Louise and Ruby; and a host of nieces, nephews, and friends. Family and Friends, Thank you very much for your kind words and support over the past few days. Below is an email that should hopefully answer many of your questions regarding arrangements. Please feel free to pass this along to anyone I missed, I do not have email addresses for everyone due to the prevalence of text messaging! Where to send Flowers or Donations 1) Flowers can be sent to: Queen Chapel AME Church 114 Beach City Rd Hilton Head Island, SC 29926 (843) 681-3315 2) Check donations can be sent to: Mitchelville Preservation Project 539 William Hilton Pkwy Hilton Head Island, SC 29926 Please note "In Memory of Lovett Hardy" in the memo of your check http://exploremitchelville.org Saturday, October 22 1) Visitation: 11am-1pm Queen Chapel AME Church 114 Beach City Rd Hilton Head Island, SC 29926 (843) 681-3315 2) Memorial Service: 1pm-2pm Queen Chapel AME Church 114 Beach City Rd Hilton Head Island, SC 29926 (843) 681-3315 3) Burial: (after the Memorial Service) Six Oak Cemetery 175 Greenwood Drive Hilton Head Island, SC 29928 (843) 671-1343 (Located inside of Sea Pines) Travel Airports Hilton Head Airport Savannah, GA (More reasonably priced, more reliable flight schedules) Hotel Accommodation There are a plethora of options available on Hilton Head Island. We hope that many hotels will be reopened by end of next week, despite the damage created by Hurricane Matthew. Due to the location of the service, we recommend that family stay on the North on Mid-parts of the island. Most hotel chains are operating and we have been in touch with and negotiated with a few establishments. A few places have offered us a discounted rate, I have included the rate and contact information below: Westin Hotel (843) 681-4000 Rate: $159 + tax Contact: [email protected] (mention the Peterson Family rate) Ramada Inn (843) 681-3655 Rate: $119 + tax (approx $130) Contact: Jody Park Lane Suites (843) 686-5700 Rate: $120 + tax Contact: Mary There also might be a few options available on Air BNB. (Look for a property in Sea Pines) Key Contacts Primary Contact- Rana Barclay (Bob's Granddaughter): 773-960-1363 Shirley "Peaches" Peterson (Bob's Daughter) & Coleman Peterson (Bob's Son-In-Law): 843-671-2078 Collin Peterson (Bob's Grandson): 479-721-5326 Please let me know if you will be attending, we look forward to seeing you.

Lovett &#8220;Bob&#8221; Hardy was born March 25, 1924, in Sawyerville, AL, to the late Lelia Ann Jackson Hardy and John Albert Hardy. He was the ninth of thirteen children born into a family of sharecroppers during rigid segregation in the... View Obituary & Service Information

The family of Lovett Hardy created this Life Tributes page to make it easy to share your memories.

Send flowers to the Hardy family.