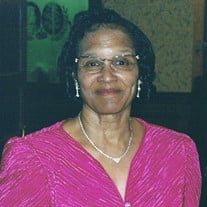 On Friday, February 7, 2020, the Lord sent down His angels to bring another saint home to rest. Loyvone Mobley Washington took her last breath surrounded by family at her residence in Charlotte, North Carolina. Born August 25, 1941, in Winnsboro, South Carolina, she was the third of nine children born to the late Dan Elain Mobley, Sr. and Mildred Harris Mobley. She was a life long member of New Hope AME Church where she served on the Missionary Board, was a Sunday School teacher, an usher, and part of the Christian Education Department She was a graduate of McCrorey-Liston High School in the Class of 1959, where she was the valedictorian of the senior class. She attended Morris College and earned a Bachelor's Degree in Elementary Education in 1963. She met the love of her life, Joseph Washington, while attending Morris College, and on July 10, 1965, they married in Newport News, Virginia. They were later stationed in Germany where both their daughters, Jolonda and Lenee, were born (eight years apart). In 1977, they relocated to Columbia, South Carolina, where Loyvone raised their daughters while Joseph served our country until his retirement in 1984. In 1979, Loyvone earned a Master's Degree in Education from the University of South Carolina and taught at various elementary schools but primarily at A.C. Moore Elementary. She was selected as Teacher of the Year at A. C. Moore in 1991. She retired in 1999 after over thirty years of dedicated service. In her spare time, Loyvone enjoyed being the event planner and hostess for holidays. She also enjoyed baking and decorating cakes. She was quiet and soft-spoken, but effective with children, her family, and her students. Loyvone lived out her faith by always helping those in need, having a kind, gentle spirit, and teaching her children about the God that she served. She enrolled her daughters in every extra curricular activity ranging from dancing, music (piano, violin and clarinet), Girl Scouts, and PTA activities. In addition to her parents and husband, she was preceded in death by a brother, Dan Elain Mobley, Jr.; and two sisters: Janie McCants and Adell Chestnut. She leaves to cherish precious memories her daughters: Jolonda Washington and Lenee (Frederick) Madden, both of Charlotte; two granddaughters: Nicole and Kristen Madden of Charlotte; four sisters: Phyonica (Charlie) Huff of Columbia, Gail Davis, Felicia Roberson, and Betina Mobley, all of Winnsboro; one brother Leslie (Maggie) Mobley of Winnsboro; three sisters-in-law: Shirley Mobley, Mary Washington, and Eleanor Washington; and a host of nieces, nephews, other relatives and friends. In lieu of flowers, please make memorial donations to the Alzheimer's Association of America.

On Friday, February 7, 2020, the Lord sent down His angels to bring another saint home to rest. Loyvone Mobley Washington took her last breath surrounded by family at her residence in Charlotte, North Carolina. Born August 25, 1941, in Winnsboro,... View Obituary & Service Information

The family of Loyvone Mobley Washington created this Life Tributes page to make it easy to share your memories.