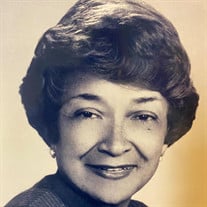 Lucile Ish, prominent leader in health administration, medical social work and education passed away peacefully on May 16, 2022 in Hilton Head, SC under the care of her niece and her husband Etta Sue and Jesse Henderson. A native of Little Rock, Arkansas, Lucile Ish was born to Dr. George William Stanley Ish Sr. and Lily Lucille Johnson on May 2, 1927. Ms. Ish worked extensively in the areas of health and social services as a former regional director for the Office of Civil Rights for the U.S. Department of Health. She also held positions with the Chicago Board of Health, West Side and Cook County Hospital in Chicago, Illinois. Ms. Ish served as the Chairperson of Talledega Colleges' Board of Trustees, and Vice-Chair of the President Clinton’s Board of Advisors on Historically Black Colleges and Universities. An alumnae of Talladega College, Ms. Ish received numerous honors that include the naming of Ish Hall at Talladega College, to recognize the contribution of the Ish family to the field of education. She received her M.A. from the University of Chicago in Social Service Administration and an Honorary PhD from Talladega College. After retiring from the Federal Government, Ms Ish sold real estate in Chicago and Hilton Head, SC. For several decades, she maintained two residences living six months in Chicago and six months in Hilton Head. Ms. Ish was also known for her numerous volunteer affiliations, donating her time and energy to such groups as the Illinois Children’s Home and Aid Society, United Negro College Fund, The Links, Inc., Delta Sigma Theta Sorority, The Smart Set, and founding member of the Hilton Head Sea Island Friends, just to name a few. Ms. Ish is survived by her God daughter and great niece Jamie Weems, Atlanta GA and other nieces, Marye Ish , Fort Washington MD, Lynn Ish Green, Detroit MI, and nephews Stanley Henderson, Los Angeles CA, Mose Jeff Henderson, Los Angeles CA and Maceo Shaw, Louisville KY. In her lifetime, she acquired many wonderful and endearing friends and will be greatly missed.

Lucile Ish, prominent leader in health administration, medical social work and education passed away peacefully on May 16, 2022 in Hilton Head, SC under the care of her niece and her husband Etta Sue and Jesse Henderson. A native of Little... View Obituary & Service Information

The family of Dr. Lucile Ish created this Life Tributes page to make it easy to share your memories.

Send flowers to the Ish family.