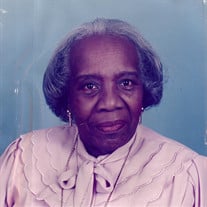 Lucille M. Battle, affectionately known as Sister, departed this earthly life on Friday, June 3, 2016 at Blue Ridge Rehabilitation Center in Sumter, SC. Born in Sumter County, she was the eldest child born to the late Sam McCleary and Bina Bradford McCleary. She was joined in Holy Matrimony in the early 1940’s to the late Ivory Battle. Mrs. Battle was educated in the public schools of Sumter County. In her early years, she was raised in Ebenezer A.M. E. Church and later joined St. Luke A.M.E. Church of Sumter. In 1941, she moved to Brooklyn, New York and joined Peoples’ Institutional A.M.E. Church, where she served on the Women’s Missionary, the South Carolina Club and was active in the Senior Citizens Program. While residing in New York, she was self-employed as a homemaker and retired after 41 years. In 1982, she returned to her native home of Sumter. She rejoined St. Luke A.M.E. Church and was a faithful member. Mrs. Battle loved her church and served in many capacities including: The Willing Workers, Women’s Missionary, Church School, Stewardess Board, and Jewels Ministry. On May 8, 2016, she was awarded The Special Mother’s Recognition Plaque. In her time of leisure, she enjoyed gardening, playing Bingo and hosted many Po-keno parties. Lucille enjoyed cooking. Family and friends gathered each Thursday for her special dish of cabbage and fried fish. Those times together will certainly be cherished by her loved ones for years to come. In addition to her parents and husband, she was preceded in death by a son, Sam China, a grandson, Stanley Anderson, and a great-grandson, Cagney Session. We, the family, will cherish her precious memories eternally. Survivors include: a daughter, Leola Sessions of Sumter, a daughter-in-law, Estelle China of Hillside, New Jersey, nine grandchildren; 12 great-grandchildren; four great-great grandchildren, one nephew Gerard Benjamin, and a host of other relatives and friends.

The family of Mrs. Lucille M. Battle created this Life Tributes page to make it easy to share your memories.

Send flowers to the Battle family.