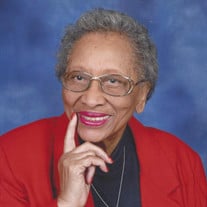 Lucille Miriam Glover Johnson was born September 29, 1929, in Tillman, South Carolina, to the late Sandy and Irene (nee Simmons) Glover as the youngest of four siblings. When she was six years old, the family moved to Columbia where she was educated in the public schools of Richland County. She graduated from Booker T. Washington High School where she pursued a career in cosmetology; following graduation Lucille registered with the State Board of Cosmetology. With a deep and abiding love for the field, Lucille worked more than 50 years in multiple locations including Elise Beauty Salon on Washington Street (later known as Accent Elise Beauty Salon at its Sumter Street location) and Dorothy’s House of Beauty for the latter part of her career until her health failed in 2016. A proud member of the South Carolina Cosmetology Association, Lucille cultivated an extensive clientele in Columbia, Orangeburg, North, and the surrounding areas. For many years her attendance at the South Carolina Cosmetology Association Annual Convention was a highly anticipated occurrence. Lucille became a member of Zion Baptist Church in her early years when she received Jesus Christ as her Lord and Savior. She loved the Lord and her church (Big Zion), and Lucille truly enjoyed good preaching and singing. Lucille was married to Eugene Johnson who preceded her in death. Additionally, she was preceded in death by her parents and her siblings: two brothers, Samuel and Manzie Glover, and a sister, Katie J. Glover. Loving memories will always be held in the hearts of: her adopted son Pastor Eddie L. (Sandra G.) Jones; their three children who affectionately call her “Granny:” Eddie (Carol) Jones II of Gastonia, North Carolina, Mark A. Jones of Columbia, and Samuel A. Jones of Hopevale, Massachusetts; eight beloved nieces and nephew: Narvis Redmond of Columbia, Ethel Solomon, Jennie Hawks, Juanita Watt, Lucille Glover, Delores Glover, Patricia Mickens, and Samuel Glover, all of Linden, New Jersey; two sisters-in-law: Bernice Johnson and Mildred Johnson, both of Columbia; two godchildren: Patricia J. Smith and Benjamin Graham; and a host of other relatives and close friends that will dearly miss her.

Lucille Miriam Glover Johnson was born September 29, 1929, in Tillman, South Carolina, to the late Sandy and Irene (nee Simmons) Glover as the youngest of four siblings. When she was six years old, the family moved to Columbia where she was... View Obituary & Service Information

The family of Lucille Glover Johnson created this Life Tributes page to make it easy to share your memories.