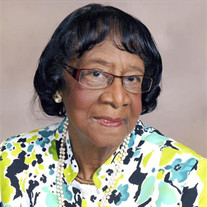 Lutherine Vance Smith, affectionately known as “Mama Lou,” “Aunt Lou,” “Cousin Lou,” or “Miss Lou,” departed this earthly life on Friday, January 20, 2017, at the Palmetto Baptist Hospital in Columbia, South Carolina. Born in Richland County on July 17, 1923, she was the second eldest of four children born to the late Frank and Wilhelmina Burton Vance. She began her spiritual journey at the precious age of two while attending Bethel African Methodist Episcopal Church in Columbia. Under the leadership of active Christian parents, she joined the church at the age of twelve. The Vance family were devoted members and attended church every Sunday and also sang on the choir. Her favorite musical selections were “Great Is Thy Faithfulness” and “How Great Thou Art.” Her favorite scriptures were Psalm 23 and Psalm 37, which she attempted to incorporate into her daily living. Lutherine became a faithful member of the Frances Burns United Methodist where she served in numerous capacities including: the Communion Stewards and member of the Frances Burns UMC Older Adult Ministry. Her love for people and being obedient to the laws of God were her top priority. Her motto in life was “If I can help somebody, then my living will not be in vain.” Miss Lou graduated from Booker T. Washington High School in the Class of 1940 and Allen University in the Class of 1944. She completed additional studies at South Carolina State College and the University of South Carolina. Mrs. Smith was superb and dedicated educator who taught for many years at the following Richland County District One schools: Carver, Waverly, Howard and Bradley Elementary Schools. While at Bradley Elementary, she earned the high honor of being elected South Carolina Teacher of the Year in 1972. She retired from teaching in 1985. In her spare time, she was passionate about gardening, reading, and watching sports on television. She was also a member of the Cabs Bridge Sisters and Delta Sigma Theta Sorority, Inc. In addition to her parents, she was preceded in death by a brother, Charles Vance; her sisters: Frances Vance Pennington, Mattie Vance Boyd; two brothers-in-law: Dr. Vernon Pennington and Cornell Boyd. Lutherine leaves to cherish precious memories here nieces: Reavelle Stephenson of Atlanta, GA, and Paulette (Jimmie) Williams of Cassatt, SC; two great-grandnieces; two great-great-grandnieces; and a host of other relatives and friends.

The family of Mrs. Lutherine Vance Smith created this Life Tributes page to make it easy to share your memories.

Send flowers to the Smith family.