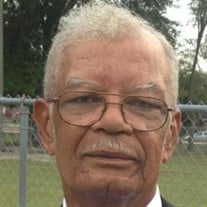 Mackey Deschamps, husband of Adraine Deschamps went home to be with the Lord on Tuesday, February 23, 2021 in Manning South Carolina. He was born in Pinewood, SC on January 5, 1939 to Henrietta Rhames Deschamps White and Leon Deschamps. After his father’s death, he was lovingly reared by his mother and stepfather, Ransom Eugene White. Mackey attended schools in Clarendon County, SC. He retired from Madison Industries, Inc. after 36 years of employment. During his employment, Mackey was known for his ingenuity in devising apparatus that simplified tasks and increased productivity. He loved the Lord and at an early age, Mackey became a member of New Hope AME Church where he served in many capacities including: Trustee Board member, Finance Committee member, and member of the choir. He was a member of the Silver Lodge #35 and Royal Arch, Chapter #38, where he actively participated for over fifty years. Mackey was married to Adraine, the love of his life for over 57 years. He cherished time with his family, especially with his grandchildren and great grandchildren who brought him much joy. His generosity and devotion along with that of his wife in caring for his parents and sharing his home with loved ones for many years is a true testament to his selflessness and the God-fearing person he truly was. He will always be remembered as a loving, gentle giant whose silence spoke volumes to those who loved and knew him. In addition to his parents, Mackey was preceded in death by his grandson, Shawn White; his sisters, Sandra White, Minnie Deschamps, Gardenia Charles, and Deborah Goodwater. Mackey leaves to cherish precious memories: his beloved wife Adraine of the home; his daughters, Mrs. Carolyn (Patrick) Bennett and Mrs. Doris (Ervin) White, his grandchildren, Shante’ Nicole (Warren) Scott, Kayla Bennett, and Zana Bennett; his great grandchildren, Jalen, Devin, and Ariyanna Scott, all of Columbia, SC; sisters, Darcus Richburg of Baltimore, MD., Gwendolyn Taylor of Philadelphia, PA and Doris (James) Walker of Asheville, NC; brothers, Roland White of the home and Thurgood (Carolyn) White of Albany, GA; sisters-in-law, Alice (Joseph )Cummings of Summerville, SC, Diane James and Florence Knight of Pinewood, SC; brothers-in-law, Saymon (Daisy) James and Wilkie James all of Pinewood, SC; and many other relatives and friends. To access the livestream of the service, please go to Facebook.com, search for Palmer Memorial Chapel Inc, and "like" the page. The livestream video will begin at the designated time of the service.

Mackey Deschamps, husband of Adraine Deschamps went home to be with the Lord on Tuesday, February 23, 2021 in Manning South Carolina. He was born in Pinewood, SC on January 5, 1939 to Henrietta Rhames Deschamps White and Leon Deschamps. After... View Obituary & Service Information

The family of Mackey Deschamps created this Life Tributes page to make it easy to share your memories.

Mackey Deschamps, husband of Adraine Deschamps went home to be...

Send flowers to the Deschamps family.