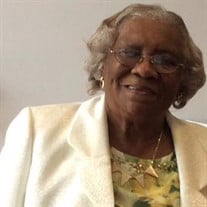 Mrs. Maggie Mae Summers Simmons was born February 11, 1929, in Columbia, South Carolina and was the eldest of the four children born to the late James and Corrie Summers. During the calm late evening hours of Friday, February 4, 2017, at Emory Anderson Hospital in Atlanta, Georgia, Maggie Simmons found peace and comfort; she entered into eternal rest to live with the Lord. Maggie was educated in the public schools of Richland County, South Carolina. At an early age, Maggie became a faithful member of Central Baptist Church where she continued her affiliation until her death where she served as an honorary member of the Behavioral Health Ministry. She was an active member of the Eastern Star Chapter of Queen Elizabeth where she was Matron for several years, Herron of Jericho, Lady Knights of Templar and Mahara Court Daughter of Sphinx. Maggie was married to the late Adner Simmons, Jr.; three children were born to this union. She was a stay at home mom who provided a loving home environment for her family. She was an avid reader and loved to travel. She also enjoyed reading and studying God’s Word. She was preceded in death by her husband, Adner Simmons, Jr, and her three sisters: Daisy Suber, Doris Tate, and Claire Davis. She leaves to cherish precious memories her three children; Carrel Simmons (Converse) Watkins, Loretta Simmons (Benjamin) Singleton, and Anthony (Pamela) Simmons; four granddaughters: Michele Simmons-Wilson, Tevera Simmons, Anissa Simmons, and Vanessa Simmons; twelve great grandchildren; one great-great grandchild; and a host of nieces, nephews and friends. Maggie has touched many lives with her words of wisdom, and her love and kindness will be forever remembered.

Mrs. Maggie Mae Summers Simmons was born February 11, 1929, in Columbia, South Carolina and was the eldest of the four children born to the late James and Corrie Summers. During the calm late evening hours of Friday, February 4, 2017, at Emory... View Obituary & Service Information

The family of Mrs Maggie Mae Simmons created this Life Tributes page to make it easy to share your memories.

Send flowers to the Simmons family.