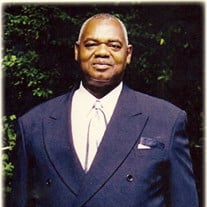 Manning Lee Brisbane, husband of the late Gloria Jean Johnson S. Brisbane, was born August 30, 1945 in Sumter County, SC. He entered into eternal rest on April 26, 2019 at Prisma Health Tuomey in Sumter, SC. He was a son of the late Manning Leroy Durant and Wilhelmina Murray Durant. Manning was educated in the public school systems of Sumter County, SC and the District of Columbia. He graduated from Phelps Vocational High School, District of Columbia. Manning was employed for 18 years at the Montgomery County Public School system in the state of Maryland. Living in a Christian home, his parents instilled in him the love for serving God. Manning attended church regularly and accepted Christ as his Savior at an early age. During his lifetime, he attended church wherever he lived. Manning lived in various places to include: District of Columbia, Maryland, Virginia and South Carolina. After re-locating to Sumter, he joined Wayman Chapel A.M.E. Church and attended for many years. Manning was a very loving person, showing compassion for everyone he met. He cared about others. “Donnie” as he was often called, was devoted to his family and showed unconditional love for each family member. They all knew that he was always there for them. In his spare time, he loved fishing and spending time with his many grandchildren. Manning was previously married to Gail O’Neal and that union was blessed with a loving son, Manning L. Durant, Jr. He was preceded in death by one son, Brandon Parrott, two sisters and four brothers. He leaves to cherish fond memories: a loving son, Manning (Laronda) Durant of Upper Marlboro, MD; three daughters of the heart, Jennifer (Antonio) Ray of Ellenwood, GA; Deonna Parrott of Suitland, MD, and Ja’Kayel O’Hannon of Clinton, MD; a niece of the heart, Chastey (Bishop Anthony) Gibson; eight grandchildren: Milan, Jordan, Gabrielle, Jabari, Treymond, Shanease, Addison, and Anyla; one great-grandson: Treymond, II ;four siblings: Carrie Campbell of Lovettsville, VA, Ossie (Audrey) Durant of Hempstead, NC, William (Jean) Durant of District, MD, and Timothy (Rachiel) Durant of Hyattsville, VA; a special friend, Carrie Reid; a host of nieces, nephews, cousins and other relatives and dear friends. , 2nd Back Page (Poem) A Letter from Heaven

Manning Lee Brisbane, husband of the late Gloria Jean Johnson S. Brisbane, was born August 30, 1945 in Sumter County, SC. He entered into eternal rest on April 26, 2019 at Prisma Health Tuomey in Sumter, SC. He was a son of the late Manning... View Obituary & Service Information

The family of Manning Lee Brisbane created this Life Tributes page to make it easy to share your memories.

Send flowers to the Brisbane family.