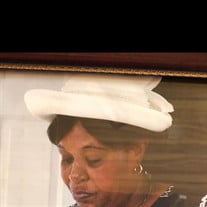 Margaret Campbell Phelps departed this earthly life in the early morning hours of Monday, May 6, 2019 at the Providence Hospital, downtown Columbia, South Carolina. She was surrounded and supported by family members in the time leading up to her transition. Born on October 28, 1946, in Philadelphia, Pennsylvania, she was the biological daughter of Ike Blanding and Mamie Lannaman. She was raised in Horatio, SC by her parents, the late Marcus Campbell and his wife, the late Luceiner Campbell. Margaret attended the public schools of Sumter County. She was married at the age of 18 to Mr. Dewey Spencer and they had five children. She worked briefly at Kentucky Fried Chicken in Camden, and at R.C. McEntyre Company of Columbia, SC. She quickly learned her most fulfilling purpose was as a mother, a homemaker, and grandmother, which she thoroughly enjoyed. She was also a member of Willow Grove African Methodist Episcopal Church in Horatio, S.C. She was preceded in death by her parents; a son; Michael Windfield Spencer; two brothers, Gregory Campbell and Henry Campbell. Margaret leaves to cherish precious memories and celebrate her life: her husband, Robert Phelps of Horatio, SC, three sons, Dewey (Joy) Spencer, Jr., Norman Spencer of Horatio, SC, Gary Spencer of Columbia, SC, and one daughter, Kendra (Melvin) DeWitt of Columbia, SC and their father, Mr. Dewey Spencer, Sr., of Horatio SC; her twin sister, Melinda ( Mark) Mickle of Camden, SC, brother Willie Lee (Shirley) Jackson of New Jersey, two grandchildren, Nakai Richardson of Charlotte, NC and Sterling Orange of Charlotte, NC; stepchildren, Noreen Phelps, Horatio SC, Michael Phelps of Leesville, SC, Quentin Nixon of Sumter, SC, Kasandra Nixon of Sumter SC,; brother in law, Sam Phelps of Virginia and a host of nieces and nephews and other extended family members .

Margaret Campbell Phelps departed this earthly life in the early morning hours of Monday, May 6, 2019 at the Providence Hospital, downtown Columbia, South Carolina. She was surrounded and supported by family members in the time leading up to... View Obituary & Service Information

The family of Margaret Campbell Phelps created this Life Tributes page to make it easy to share your memories.

Margaret Campbell Phelps departed this earthly life in the early...

Send flowers to the Phelps family.