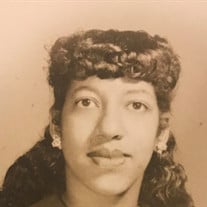 &#8220;I will lift up mine eyes unto the hills, from whence cometh my help. My help cometh from the LORD, which made Heaven and earth.&#8221; Deaconess/Trustee Marian W Davis of 1719 Craven Street, Columbia, South Carolina was called to her... View Obituary & Service Information

The family of Mrs. Marian W. Davis created this Life Tributes page to make it easy to share your memories.

“I will lift up mine eyes unto the hills, from whence cometh...