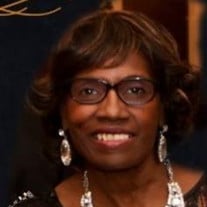 Marjorie Lewis entered rest on Sunday, August 11, 2019, at Agape Hospice House in Lexington County. She was the daughter of the late Deacon Connie Lewis, Sr., and Deaconess Alberta C. Lewis. She was born in Columbia, SC, on July 7, 1949. Marjorie attended Burton Elementary, W.A. Perry Middle School, and graduated from C. A. Johnson High School in 1967. After graduation, Marjorie served in numerous capacities in the healthcare and rehabilitation industries. Marjorie valued education tremendously. In 1982, she graduated from Midlands Technical College with an Associate of Science in Allied Health. Throughout the '80s and '90s, she furthered her education at Tuskegee and Grand Canyon Universities, acquiring certifications in Early Childhood Education and Occupational Therapy. Her roles as a nurse technician and residential advisor in cities throughout North Carolina, South Carolina, Arizona, and Washington, D.C., allowed her to spread her traveling wings. Marjorie touched more than 30 states, and made friends in each and every one. Well dressed, vibrant and easy to love, Marjorie’s toothy smile earned her the reputation as a loyal and supportive friend, with a heart for every pet and human she encountered. In 1988, this loyalty and dedication to her friends earned her the title of Godmother to Darius Adams, son of the late Jacquelyn Adams. She devoted these same characteristics to Central Baptist Church for over 50 years, where she was baptized by the late Rev. M.J. Odom. At Central Baptist Church, Marjorie served on the Missionary Society and sang alto in the Golden Voices Choir. In 2007, Marjorie returned home from Charlotte, NC, to care for her mother, Deaconess Alberta C. Lewis. During her stay in Columbia, Marjorie served in classrooms throughout Richland One School District as an autistic and special needs educator until her retirement in 2017. Marjorie’s memory will be eternally cherished by her loving sisters: Mildred Jamison and Mary Louise Hart; her godson; and a host of nieces and nephews.

Marjorie Lewis entered rest on Sunday, August 11, 2019, at Agape Hospice House in Lexington County. She was the daughter of the late Deacon Connie Lewis, Sr., and Deaconess Alberta C. Lewis. She was born in Columbia, SC, on July 7, 1949. Marjorie... View Obituary & Service Information

The family of Marjorie Lewis created this Life Tributes page to make it easy to share your memories.