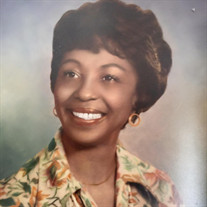 Marjorie Joyce Mims was the oldest of three children born to Raleigh and Pearl Jackson Joyce, on September 14, 1926 in Melrose Park, Illinois. Marjorie was happily married to the love of her life, Thomas Samuel "TS" Mims for 46 years and to this loving union two sons were born, John Wesley and Raleigh Thomas. Marjorie attended Lincoln University, in Jefferson City, Missouri and later transferred to the University of Illinois where she earned an undergraduate degree. Marjorie received her graduate degree in Guidance and Counseling from the University of Illinois Urbana/Champaign, Illinois. Post graduate studies were at the University of Chicago, Roosevelt University, DePaul University, and Chicago State University. Her professional career was spent as a teacher at Washington Elementary, teacher counselor, and Assistant Principal at Fisk Elementary School. In 1987, she retired as a counselor at Dumas Elementary School. Mrs. Mims was a devoted Christian and member of Bethesda Missionary Baptist Church, Chicago, Illinois, along with her husband Thomas for over 50 plus years. She served Bethesda as a member of the Board of Trustees, Usher Board, and other advisory positions. Mrs. Mims was dedicated and very passionate about her commitment to the Church. Marjorie was also very active in many social community organizations throughout Chicago and the South Shore neighborhood where she and husband Thomas were declared as the longest residential home owner in the Jackson Park Highlands, in which she resided and was a member of the Jackson Park Highlands Association. Mrs. Mims, the eleventh Central Area Director of The Links, Incorporated, was inducted into the North Shore Illinois Chapter in 1972. Her region included 13 states and 102 chapters of which she supervised. In 1974, she joined the Chicago Illinois Chapter of The Links, Inc. Marjorie served on the National Executive Council for eight years during which time she was National Chair of Awards and Certificates. Using the theme "Enhancing the Legacy, Fulfilling the Dream", Mrs. Mims presided over two Central Area Conferences. She also established a newsletter and an Archival History Book which included a history of each of the 58 chapters in Central Area at the time. Her tenure was highlighted with the installation of eight chapters. In July 2012, in Orlando, Florida she received one of the highest membership awards “Platinum” at The Links Incorporated National Assembly. Over 40 years ago, Marjorie had a vision that the Hilton Head Island Links Chapter become established. This vision became a reality, on Saturday November 4, 2017. In addition to her extensive Link involvement, she organized the Chicago Chapter of the CHUMS, was past National Vice President of the Moles, Inc., member of the Hyde Park-Kenwood Auxiliary, member of Jack and Jill of America, Inc., Vice President of the South Shore Auxiliary, Member of the National Counselor Association, Chicago Teachers Union, member of Alpha Kappa Alpha Sorority, Inc. (she was initiated at the University of Illinois, Champaign/Urbana. In 2013 Marjorie made a very difficult decision to relocate to Hilton Head Island, South Carolina. Marjorie and Thomas maintained a second home in Sea Pines for many years for easier living without the hustle and bustle of Chicago. After relocating to her treasured island, she served the community in the following capacities: Volunteers in Medicine, Beaufort County Democratic Party, and the Women's Club of Sea Pines. In addition to her parents, she was preceded in death by her son Raleigh Thomas Mims in 1987 and her beloved husband Thomas in 2000; two brothers Raleigh Joyce and Dr. Donald Joyce. Marjorie Joyce Mims leaves to cherish precious memories: her son John Wesley of Buford, Georgia ; two grandsons, John who lived with her until her passing and Lionel both of Hilton Head Island; one great-grandson, Adriene Mims, Jefferson, Georgia; one great-granddaughter, Jamiyah Gadsden; a cousin Helena Joyce- DuBose of Okemos, Michigan; as well as a host of other relatives and dear friends. Marjorie Joyce Mims lived a long and joyous life with the Lord. Do Not Mourn “Celebrate My Long Life” I Have Enjoyed a Very Fruitful Life. It Is Now Time for a Beautiful, Peaceful, Spiritual, and Merciful Transition To God Be the Glory Hallelujah! Hallelujah!

Marjorie Joyce Mims was the oldest of three children born to Raleigh and Pearl Jackson Joyce, on September 14, 1926 in Melrose Park, Illinois. Marjorie was happily married to the love of her life, Thomas Samuel "TS" Mims for 46 years and to... View Obituary & Service Information

The family of Marjorie Joyce Mims created this Life Tributes page to make it easy to share your memories.

Marjorie Joyce Mims was the oldest of three children born to...

Send flowers to the Mims family.