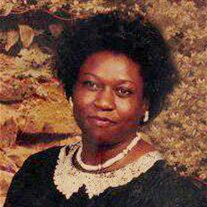 “Then sang Moses and the children of Israel this song unto the Lord, and spoke, saying, I will sing unto the Lord.” Exodus 15:1 Martha ‘Cudda’ Dukes Gordon was born April 11, 1951, in Sumter County. She was the widow of the late Albert Gordon, Sr. and the daughter of the late, Wallace and Julia T. Dukes. She entered into eternal rest on Saturday morning, September 12th at 11:56 a.m. at her home on Woods Street, Sumter, South Carolina. Martha was known as the “Singing Bird”. She loved to sing, and she never said no to anyone who asked her to sing. She was a chef, she cooked and fed everyone who wanted or needed a meal. She was a daycare provider for family and friends. She would take good care of your children, and she was chauffeur making sure people had rides to places they needed to go. Martha attended the public schools of Clarendon and Sumter Counties. She graduated from Mayewood High School in 1971, Sumter, SC. She also attended Sumter Technical College. She received a Certificate of Graduation for completing training in the use of computers in 2006 at Crestwood High School. Martha was employed with Carolina Furniture Works, Inc. for 35 years and retired in 2008. At an early age, she accepted Christ as her Savior and joined the Mulberry Missionary Baptist Church; where she served faithfully and sincerely. She was the president of the former O.S. Scott, Choir, president of the Unity Choir, member of the Senior, Choir, member of the Wateree Association Lower Division choir, Y.W.A., Senior Citizen Ministry and she performed in many dramatic plays given by the church. Martha loved her church and her Pastor. On March 17, 1972, she married the love of her life Albert and to this union three sons and a daughter were born. Her family expanded to include four other children. In addition to her parents, she was preceded in death by her husband, parents and one son Albert Gordon Jr. Two sisters, Julia Ann Dukes and Mary D. Robinson, two brothers Wallace Dukes Jr. and Jerome Dukes. She leaves to cherish fond memories, four children, Reginald Maurice, Walisha Sharlene Gordon of the home and Marvin Dwayne Gordon of Charlotte, North Carolina; additional children, Velvery (Charles) Mccoy, Marcella (Terry) Woods, Sheena Shaw of Sumter, South Carolina, Jerome (Maria) White of Charlotte North Carolina; three Grand children reared in the home, Madisyn, Brooke’lyn and Cayden Gordon; five sisters, Roxena (Rev. Ranzy) McFadden Jr., Elouise (Timothy) Williams, Katrina Gordon, Genovia (Gregory) Witherspoon and Patricia Dukes; four brothers, Robert Lee (Ruby Mae) Dukes, Howey Dukes of Sumter, South Carolina, William Dukes of Columbia, and Johnnie Dukes retired Navy of Augaua of Guam; two uncles, Dea. Robert (Mary Bell) Tomlin, Sr. and Ronnie (Vanessa) Gordon; additional aunts, Vernice Dukes, Lillian Mitchell, Jennifer Pearson and Rosanne Gordon; one sister-in-law, Janie Mae Gordon; two brothers-in-law, Jasper and Irvin (Delephenia) Gordon, numerous nieces, nephews, other relatives and many devoted friends.

The family of Mrs. Martha (Cudda) Dukes Gordon created this Life Tributes page to make it easy to share your memories.

“Then sang Moses and the children of Israel this song unto the...

Send flowers to the Gordon family.