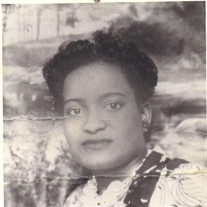 Mary Ellen Bradford-Moses departed this earthly life on Saturday, August 6, 2016 at Palmetto Health Tuomey in Sumter, South Carolina. Born October 12, 1922 in Sumter, South Carolina, she was the oldest of three children born to the late Joel Bradford and Elouise Dow Bradford. Mrs. Moses attended the public schools of Sumter County. She was a lifelong member of St. Luke A. M. E. Church, where she served faithfully in many capacities including: Willing Workers, Pastor’s Aide, Missionary Society, and Stewardess Board. In May 2016, she was awarded “Mother of The Church.” Her commitment to serve continued in her community activities as well. She was a member of the Sumter Santee Senior Citizens, Campbell Soup Retirees and an avid Nursing Home visitor. Mrs. Moses was employed by the Campbell Soup Company for over 18 Years and after retirement; she was a homemaker for her family. She was especially attentive to her grandchildren and was an excellent mother, caregiver and a beautiful mother-in- law, who always gave wise counsel. In her spare time, she enjoyed baking home-made cakes and gardening, In addition to her parents, she was preceded in death by her husband, Robertson Moses, a sister, Lillie Mae Vaughn, and brother, Edmond, Bradford, Jr. Those left to cherish precious memories are her children, Marvin G. Moses, Gwendolyn Louise Moses and Robert E. (Deborah) Moses, all of Sumter, SC; Reginald, G. (Queenie) Moses of Snellsville, GA; four grandchildren, Christopher D. Moses , Regina Service, Byron M. Moses and Preston E. Moses; one great-grandchild, Zaria Kelis Service and a host of other relatives and friends.

The family of Mary Ellen Bradford-Moses created this Life Tributes page to make it easy to share your memories.

Send flowers to the Bradford-Moses family.